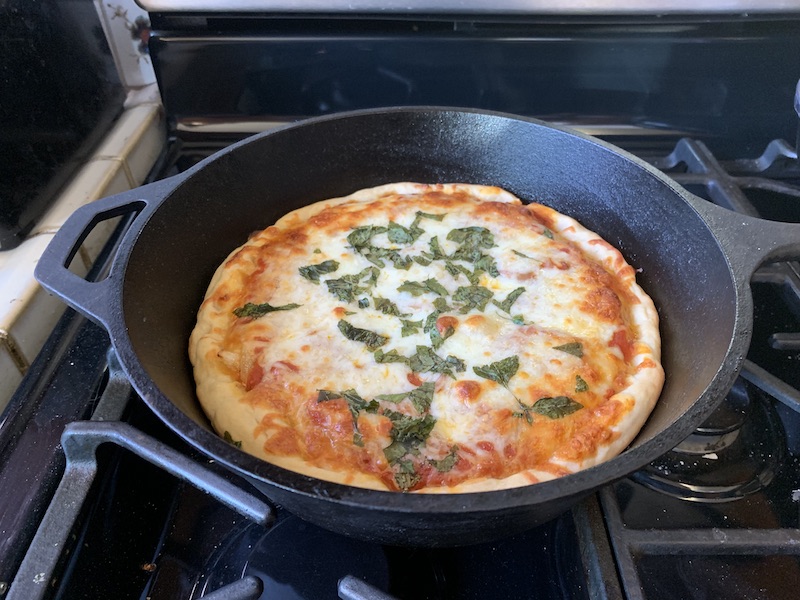 The Lodge ended its daily use, however, when I found a larger Wagner pan at the Goodwill and restored it. I started baking in my dutch oven. It is a bit easier to maneuver. When cast iron sits and isn't used, it needs to be used and this pan was truly special. I tried alternating between it and my Wagner, but the extra space and smoother finish of the Wagner kept it on my stove. It was a little easier to fry bacon and sear steaks and fish in the #9 vs the #8 pan.

My mother, who has even more kitchen gadgets than I do, did not have a deep cast-iron skillet and my father really likes the aforementioned fried chicken. The pan had a new home.

I've long meant to try a good friend's sourdough starter and he brought us some of his families long-treasured yeast. It is an amazing starter that is very, very different than the one I've long maintained in Northern California. It is more liquid and much easier to work with at the same 1:1 hydration — but I haven't figured its cycles out yet. I do have 10 years or more working with the other one.

Sourdough has put this Lodge chicken pan back to work as my Dutch oven. I haven't perfected bread yet, but I'm getting there. The starter is wonderful, but I'm still figuring out how long to let things rise with it, and how hot this oven really is.

I've been using all the sourdough discard to make pizza, and this skillet makes amazing deep-dish pizza.

My time in Chicago taught me that deep-dish doesn't have to be fancy. You can use my quick pizza dough recipe, oil the pan with olive oil drop in the whole ball of dough and moosh it into a pie. Get the dough 1 1/2" up the sides of the pan and then fill with cheese, toppings, sauce and another layer of cheese.

If you are making pizza for my mom, put the basil on top. She likes it.

I have some fried chicken sitting in buttermilk, I'll make it for my dad after it has had its obligatory 3 days. A good fry with peanut oil will certainly make the pan happy.