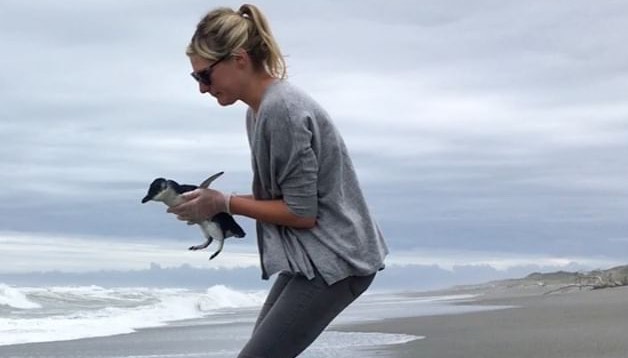 Here we repost one of our videos that has been shared widely online ? This blue penguin adult was found by a member of the public and was then transferred to us by the Department of Conservation. The penguin had a significant head wound and suffered from severe exhaustion due to plastic netting entanglement. After treatment and recovery, this patient was successfully released. We observed this penguin for an hour post-release, watching as it swam strongly out to sea, once past the initial breaking waves. Penguins generally appear wobbly on land, but are in their element under water. Ocean conditions are often rough along New Zealand's coast, with this blue penguin being used to such conditions. Blue penguins are the smallest penguin species in the world, hence the tiny size. The reason this individual was not released near a group of penguins, is that blue penguins are largely solitary at sea, as well as being nocturnal on land. Releases are the positive outcome wildlife rehabilitators hope for ? Video: Ben Foster #penguin #bluepenguin #penguins #seabirds #wildliferehabilitation #wildliferescue #wildliferehabilitator #helpingwildlife #makingadifference

A post shared by Kaikoura Wildlife Rescue (@kaikourawildliferescue) on Sep 10, 2018 at 2:20am PDT

Drone disguised as hummingbird infiltrates a swarm of monarch butterflies

PBS Nature’s “Spy in the Wild” series employs spy cameras outfitted with animatronic animal disguises to capture intimate imagery of wildlife. In this clip, a drone wearing a hummingbird costume infiltrates a swarm of monarch butterflies in the mountains of Mexico.