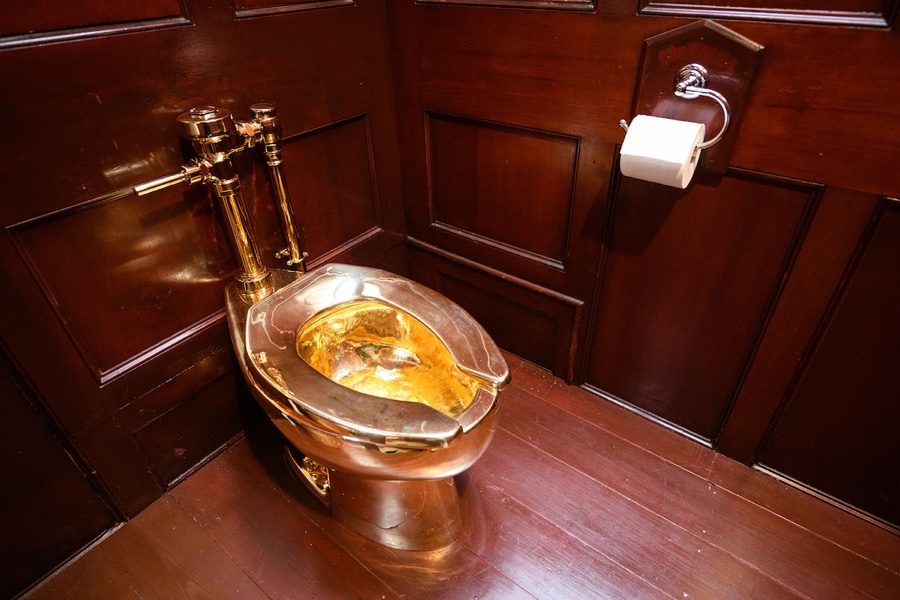 Of all the shitty luck! Burglars stole a working 18-carat gold toilet from Blenheim Palace in Britain. The golden potty was part of an art installation, police said.

Blenheim is the birthplace of Winston Churchill, and you can still go see the rest of the exhibition.

The historic building was structurally damaged by the theft.

“Due to the toilet being plumbed in to the building, this has caused significant damage and flooding,” Detective Inspector Jess Milne said in a public statement.

The toilet, valued at more than $5 million, was part of an exhibition of work by Italian conceptual artist Maurizio Cattelan which opened two days ago at the stately home 60 miles west of London, a major tourist attraction.

The toilet, named “America”, was previously on display in a cubicle at New York’s Guggenheim Museum, where more than 100,000 visitors were able to use it.

Thieves with at least two vehicles broke into the palace, the birthplace of World War Two leader Winston Churchill, and removed the toilet some time before 5 a.m. (0400 GMT), Thames Valley Police said.

First, a 66-year-old man was arrested in connection with the theft, on the same day as the theft. He was held on suspicion of burglary and released on bail until October.

Now, police have arrested a second man, 36 years old “from Cheltenham... on suspicion of conspiracy to burgle.” Suspect number two has been released under investigation.

The valuable artwork, however, is still missing.

Blenheim Palace says it is saddened by the loss of such a “precious” work of art.