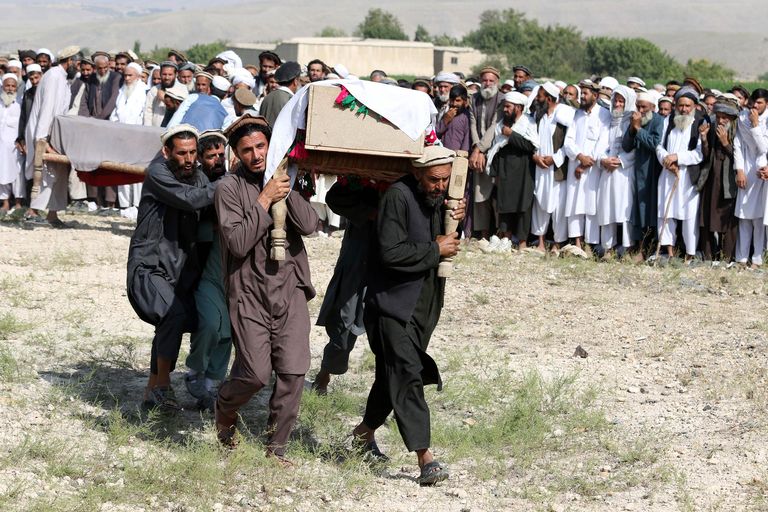 “The workers had lit a bonfire and were sitting together when a drone targeted them,” says a tribal elder.

Lest you forget, we are still at war in Afghanistan.

And we are still messing it up.

A U.S. drone strike that was intended to strike an Islamic State hideout killed “at least 30 civilians,” mostly field workers who were resting after a long day collecting pine nuts.

“The workers had lit a bonfire and were sitting together when a drone targeted them,” tribal elder Malik Rahat Gul told Reuters by phone from Wazir Tangi.

Afghanistan’s Defence Ministry and a senior U.S official in Kabul confirmed the drone strike, but did not share details of civilian casualties.

“U.S. forces conducted a drone strike against Da’esh (IS) terrorists in Nangarhar,” said Colonel Sonny Leggett, a spokesman for U.S. forces in Afghanistan. “We are aware of allegations of the death of non-combatants and are working with local officials to determine the facts.”

About 14,000 U.S. troops are in Afghanistan, training and advising Afghan security forces and conducting counter-insurgency operations against IS and the Taliban movement.

Haidar Khan, who owns the pine nut fields, said about 150 workers were there for harvesting, with some still missing as well as the confirmed dead and injured.

A survivor of the drone strike said about 200 laborers were sleeping in five tents pitched near the farm when the attack happened.

“Some of us managed to escape, some were injured but many were killed,” said Juma Gul, a resident of northeastern Kunar province who had traveled along with laborers to harvest and shell pine nuts this week.

On Thursday, many men in the area protested against the attack while carrying the victims’ bodies to Jalalabad city, and on to a burial site.

The government of the province in which the the aerial attack occurred said it was meant to target IS militants who are believed to train and recruit in rural agricultural areas.

Elin Ersson is a 21 year old Swedish social work student who boarded a plane at Gothenburg airport yesterday and refused to sit down until an Afghan asylum-seeker who was to be deported that day was offloaded and allowed to remain in Sweden.