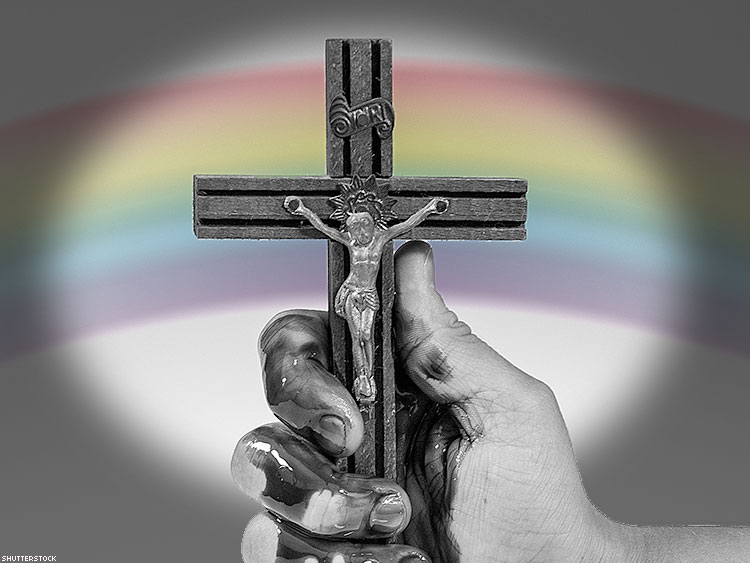 A young gay Christian man in Oklahoma says his fellow church-goers tackled him, pinned him down, punched him in the face, and tried to ‘pray the gay away,’ because he and his boyfriend are “guilty of homosexuality, an “abomination of a sin.”

Sean Cormie, who is 23 and still both queer and Christian despite the attack, says the Sunday service started out normally but got weird fast when the pastor started preaching about homosexuality as a “sin.”

Sean was there on September 8 with his partner, Gary Gardner. Sean's mom and stepdad are youth pastors at the First Assembly of God in Blackwell, Oklahoma, where Sean says Pastor Bill McKissick was pacing around the room, fuming, and saying that someone present in the church at that moment was “guilty of homosexuality,” an “abomination of a sin,” Sean says.

In a Facebook post, Sean wrote that the gay-condemning pastor then pointed his finger at Sean and Gary.

At that point, congregation members all got up and rushed them, pinning the two guys to the ground and “praying the spirit of homosexuality out of us,” wrote Sean in the post.

They were yelling and crying, trying to “pray the gay away,” he said.

“I felt about two inches tall when this started.”

Sean Cormie, 23, came out as gay in the spring. Since then, he said his family has asked him to go to church and bring his partner, Gary Gardner.

As soon as the guys got out of the church, Sarn contacted the Blackwell Oklahoma police, KFOR reports.

"They hold me down, pin me down, and I’m crying, and the Holy Spirit just comes through me, and they keep speaking in tongues, praying over me." Cormie said he was even punched in the face. "I was just crying 'mercy, mercy.'"

When they finally let him up, he went to the Blackwell Police Department to file a report. The police chief confirmed the incident is being investigated but wouldn't comment further.

Blackwell Police Chief Dewayne Wood told The Washington Post the incident is being investigated, and a report will be available later.

"I’m full fledged gay, you can’t change it," Sean Cormie told a reporter. "It’s my nature. I’m born that way, so let it be."

Sean Cormie & Gary Gardner’s Case(No.1900468) On Sunday September 8th, 2019 me and Gary Gardner decided to attend the church i been going because my Mom and husband Luis Castro are the Youth Pastor’s,and are very close too Pastor Bill and Tammy Mckissick. We were having a really good time we even got up, and hug/greeted people with a loving spirit not showing any sign of love towards each other being a couple. We began worshiping and praying to Jesus through the holy spirit. Then towards the end Pastor Bill started preaching on Homosexuality. Then kept pacing back and forth saying theres someone with this sin in this room heavy on the evil spirit of Homosexuality that needs to repent of this abombanation of a sin. Then pointed out to me, and Gary Gardner my grandma Ruthie Sheppard got up from her chair, and sat in between us. Then they all started praying the spirit of Homosexuality out of us and gathered around us, it started getting louder,louder, and louder. Me and my partner Gary Gardner decided to get up and leave, because we felt humiliated and lost by these actions. My grandma started yelling at my partner then pushed him Gary almost fell down then the church ran him out I went after him. Then my grandma grabbed my arm trying to hold me down the whole church came after me then decided to pitch in on holding me down i tried to get out with all my strength but couldnt with 12-15 people trying to hold me down with hate and force then all of a sudden Luis Castro picked me up, and slammed me into corner with force, anger, and love in the wrong way as Pat Ebert was help guiding me into the corner with Luis Castro Pats arm came up, and gave me a Black Eye.Had marks on my arm as well. They where all praying loud crying, and putting force on me praying the Gay Away. My sister is the only one that stood up for me and even some church members where saying this so so wrong. My sister was yelling, and crying for them to stop, and my mom Heather Cormie was only praying the Gay out and too let me go. I have messages confirming all these actions all took place at the First Assembly Of God on 4825 White Ave. Red Roof Church Blackwell,Ok 74631. Im currently on News four & News nine seeking the right Justice to be done and be held accountable for their actions. I am Gay and am still christian seeking antother church that accepts me for who i am. Praying daily to God for Justice and mercy on these sad acts of the church’s actions as a whole. Sincerely, SeanCormie (stop twisting my words people).