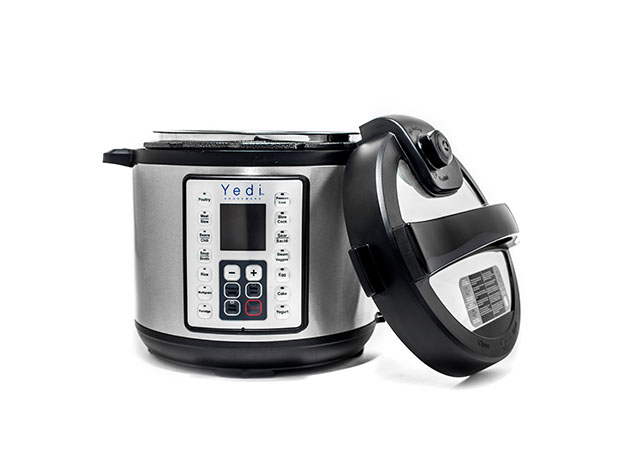 Life isn't getting any less hectic, and pressure cookers are a quick, healthy solution for a growing number of kitchens. But if you thought your Instant Pot was versatile, there's a major upgrade on the market: The Yedi 9-in-1 Total Package Instant Programmable Pressure Cooker. If you've somehow never used a pressure cooker before, try this thing out. It might just replace the microwave as your go-to meal maker.

The Yedi 9-in-1 currently has an average of 4 1/2 stars on Amazon, with well over 1,000 reviews and counting. No wonder: True to its name, it can be used to pressure cook, slow cook, sauté, steam, make cakes, pasteurize, make yogurt, cook rice, make eggs or warm food, all of which you can do with a single touch. In all, there are 15 microprocessor settings to fit most any food you care to put into it. Prepare everything from your favorite chili recipe to a whole frozen chicken, all in half the time.

And its versatility isn't just limited to single dishes. Unlike the Instant Pot, you can cook two meals at once by adding the stainless steel steamer basket.