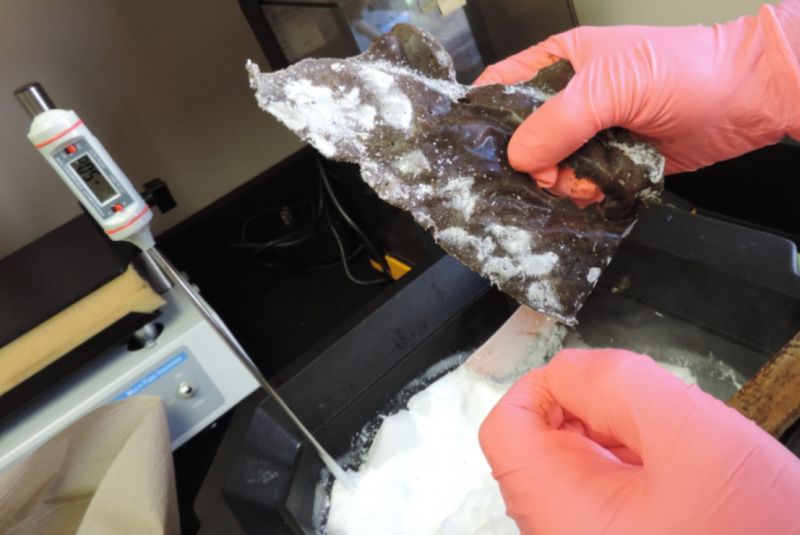 Maybe you've heard the famous story of the Inuit elder who, when his family takes away his tools to keep him from living out on the ice, makes a knife out of his own frozen poop.

The story was first popularized by anthropologist Wade Davis in a 1998 book, and even back then, even Davis admitted it miiiiiiiight be apocryphal. But the story has been repeated so often and so breathlessly that finally two anthropologists -- Metin Eren and Michelle Bebber of Kent State -- decided to test it.

So they collected their poop for several days and used it to make knifes. As Jennifer Ouellette writes in Ars Technica ...

"It's funny, because we've got this amazing lab," said Eren, but for that week, "I'm not in the lab—I'm in my house pooping in a bag, making knives out of my own feces. It was sort of depressing."

They crafted the fecal knives using ceramic molds or simply using their hands to mold the feces into a rudimentary blade before sharpening them with a metal file after they were frozen solid. Then it was time to test them.

There was no need to actually butcher a dog. Eren and Bebber used pig hide—cold and hairless—muscle, and tendons. The meat they used had been refrigerated, unlike a fresh kill, which would have been warm, and the knives were chilled in dry ice to -50 C (-58 F) prior to cutting. "We really wanted to give our knives the best possible chance to succeed," said Eren.

Unfortunately, even under these ideal lab conditions, none of the molded or hand-shaped fecal knives made from either scientist's feces succeeded in cutting through the hide. The knives simply melted upon contact, leaving behind brown streaks (skid marks) of melted poop. They did manage to make shallow slices on the subcutaneous fat on the underside of the hide, but the knife-edge still melted quickly and became unusable.

"I was amazed that human feces could get as hard as they do when frozen," Eren said. "So I was thinking to myself, 'My god, this may actually work.' That made it all the more disheartening when we did the test."

As they point out, they did their experiment in a room chilled to minus 50 degrees C, so it's possible that if you went even colder, poop knives might work.

The scientists' paper -- with the immortal title "Experimental replication shows knives manufactured from frozen human feces do not work" -- is online here unpaywalled.

your ig nobel is in the mail