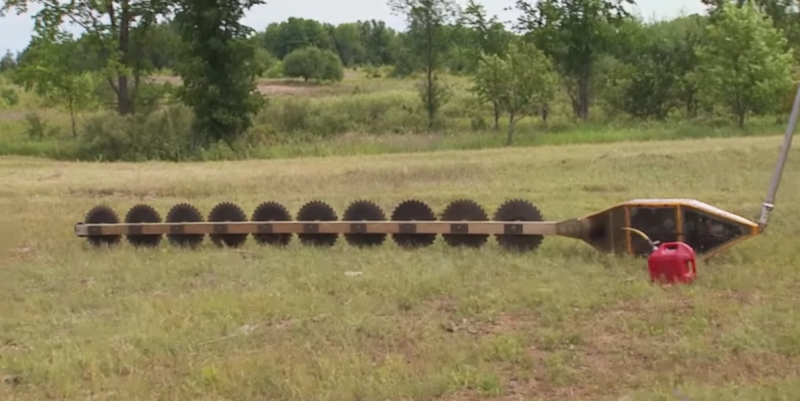 Maybe you've seen the video that's gone viral on Twitter of a helicopter trimming the trees in a forest by dangling a massive chainsaw that's composed of ten spinning blades?

If not, maybe take a minute to check it out; it is probably impossible to be disappointed by that minute of your life.

Anyway, helicopter chainsaw-ing has been going on for some years; it's often used to efficiently trim greenery that's growing too close to power lines. Popular Mechanics hunted down a company that offers it as a service and got the 411 on what it's like to pilot one of these dread mechanisms:

The 2-foot diameter blades turn at 4,000 rpm and are powered by a 28-horsepower engine controlled by the pilot, according to T&D World. It's challenging work, but plenty of additional safety measures are in place. If a saw catches on a branch, for instance, the pilot can release the entire saw and fly off.

As you'd expect, it takes a lot of training to wield this wily air saw. The more than 30 Aerial Solutions pilots who conduct this work must have over 1,000 flying hours, and a dedicated crew of mechanics is tasked with maintaining the choppers. "One of the things that we focus on—and this was part of William Cox and the Rogers Family's agreement—is to make sure that we have a safe operation," Aerial Solutions Inc.'s general manager Ted McAllister tells Popular Mechanics.

The air saw is best used in inaccessible mountainous regions and in tight spots, such as between a pipeline or power lines and the surrounding forest. Aerial Solutions dispatches a crew of two people—the pilot and a ground crewman—and argues that this method is a safer alternative to sending out hand crews who may spend days or weeks hoisted in buckets or hanging from branches.

take a little off the sides