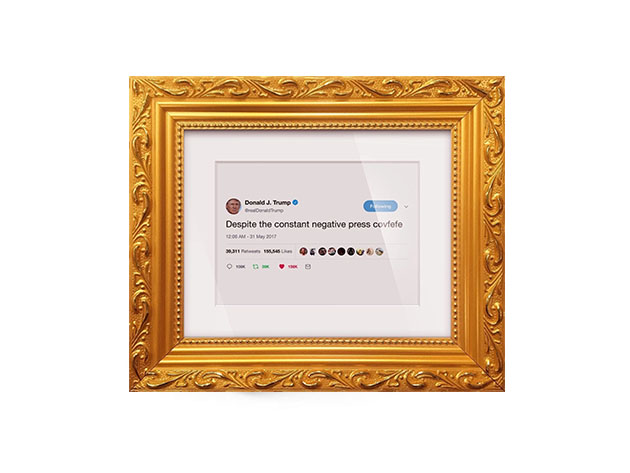 Who can forget the moment our president, the man in charge of a nuclear arsenal, coined the word "covfefe"? Sadly, it's easy to forget given the frequency and amount of head-slapping sayings he's given us - not to mention the disposable nature of his favorite mode of communication.

But not anymore. There's now a way to enshrine Donald Trump's words as the age-defining proclamations they truly are, thanks to these framed tweets by Kanye West's favorite president.

Yes, that's one of 45's defining gaffes on a cardstock print, lovingly displayed with beveled matting behind an elegant 10" x 12" gold frame made of New Zealand wood. It's suitable for mounting anywhere you'd like to meditate on the universal truth and eternal mystery of "covfefe," be it the study, living room, bedroom or bathroom. We'd go with the bathroom, but you do you.

It's hard to pick just one of Trump's tweets to transform into wall art, and luckily you don't have to. You can get the same presentation for his classic "sorry losers and haters" burn from May 2013, or the October 2012 insight in which he quipped "I have never seen a thin person drinking Diet Coke."

There's also a ton of non-presidential celebrities who get the gallery treatment. Immortalize the grammatically suspect Twitter wisdom of Cardi B, Soulja Boy, Jaden Smith, Kim Kardashian and other great philosophers of our time in the same golden frame. There are tons of options available, and right now they're all 10% off the MSRP.

"Don't Get Lost In The Sauce" Gucci Mane Framed Tweet

"I will dog walk you" Cardi B Framed Tweet