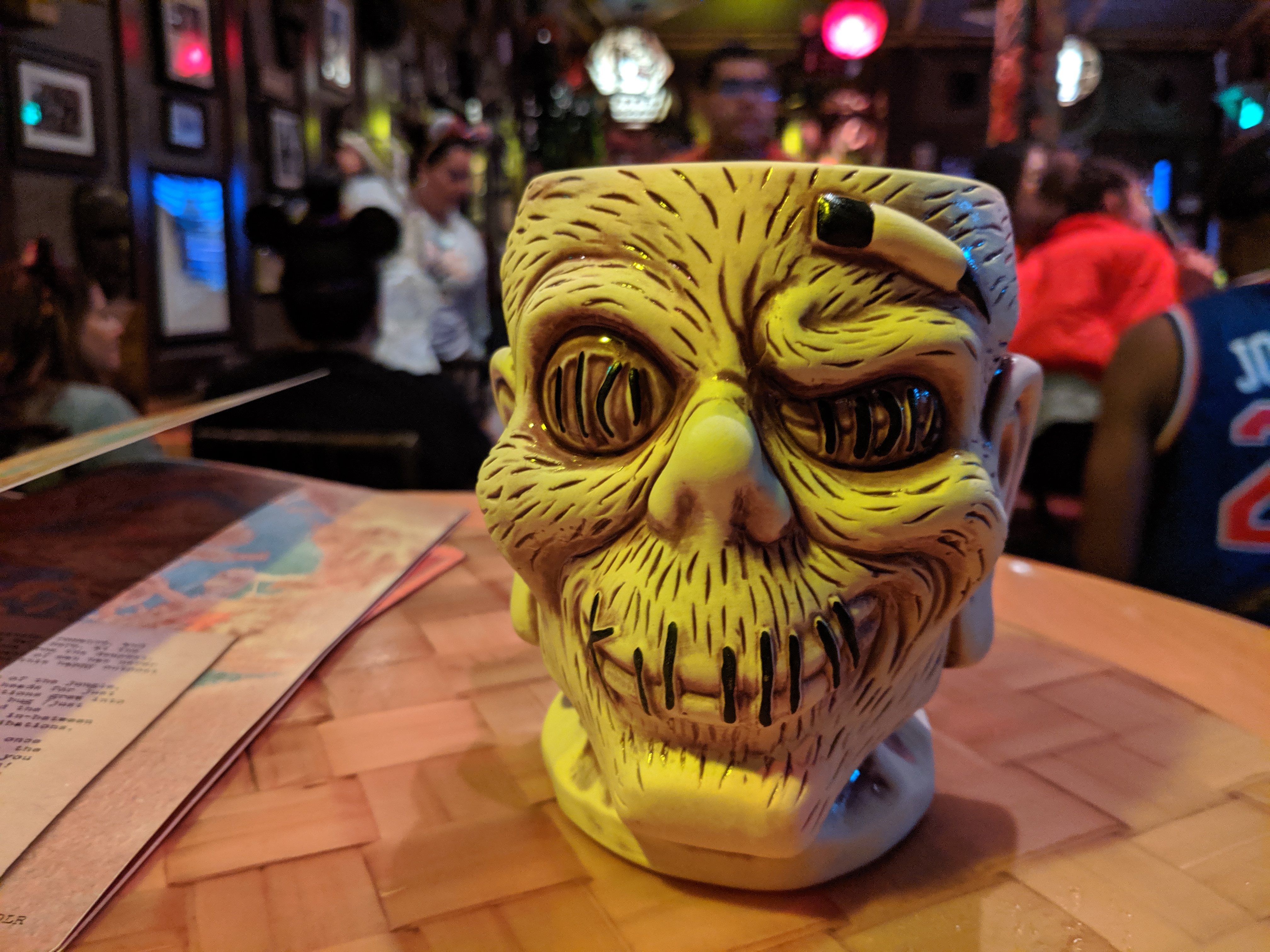 Hey hey, I'm fresh back from a short two-day excursion to Disneyland. I have a bunch of stuff to share with you but I'm going to start with my visit to Trader Sam's Enchanted Tiki Bar, that little cocktail oasis behind the pool at the Disneyland Hotel. And, if you haven't been, it really is small.

You're looking at about 1/3 of the entire bar in the photo below.

Now, while it's an intimate space, it's jam-packed with over 1600 artifacts, photos, and in-theme adornments. It's got your typical tiki bar elements mixed with real movie memorabilia (even Indiana Jones' iconic bullwhip). What it didn't have on a Monday at 6:30 p.m. was your typical tiki bar crowd, there were more sports tees and baseball caps than aloha shirts and more tourists than tiki lifestylers. But, I'm sure that changes as the evening goes on.

Its Imagineering set decorator, Brandon Kleyla (who is now Manager of Props at Universal), describes the lounge as "Adventurers Club meets Jungle Cruise meets Tiki Room." (Oh, how I miss the Adventurers Club!)

In a 2016 interview, Kleyla describes how the bar's inspiration took form:

"We had to establish 'Who is Trader Sam?' Well, he’s a trader, he’s on the Jungle Cruise... we looked at the basics. And then we asked, 'what if he knew Indiana Jones, what if he knew Jack Sparrow, or Swiss Family Robinson,' you know, all those types of characters. Basically what it came down to is that he can know anyone live-action from pretty much anywhere in Disney’s 'Adventure' history. There’s the picture of Sam with Jack Sparrow on the wall, there’s the note from Ned Land to Sam, there’s a harpoon from 20,000 Leagues Under the Sea, there’s even a reference from Castaway Cowboy, the James Garner film that takes place in Hawaii. There’s a lot of references... and park references obviously Jungle Cruise, Walt Disney’s Enchanted Tiki Room, Indiana Jones, Adventurer’s Club..."

What I've noticed in the past few years is that Disney has really dialed in their merch. Meaning, they are giving us what we want. It might not be at the price we want to pay, but the products are well thought out and getting better all the time — as we'd hope and expect from Disney. Case in point, that 4th edition Shrunken Zombie Head tiki mug (lead image above). The drink it houses is $45 (notice the price isn't listed on the drink menu), but the actual mug is your "free" souvenir.

Souvenir mugs are de rigueur at tiki bars these days, so Disney went the extra mile by offering other Trader Sam's products in their Downtown Disney Dress Shop. Like this super-cool Shrunken Zombie Head crossbody purse ($65):

And this short-sleeve button-down Trader Sam's shirt for $85:

It features the Shrunken Head Zombie plus other Trader Sam's tiki mugs and set decor (!):

That same pattern is available in a women's sleeveless dress for $128. From what I can gather, these items are only available directly from Disney's brick-and-mortar stores. You can, of course, find them online in the secondhand market for a significant premium.

Pro-tips: Go early to get a seat, plan to drop some cash, and order the "Shipwreck on the Rocks" from a Skipper (what they call bartenders) to trigger** some special effects. And by all means, get in the spirit by dressing the part!

**Other drink orders trigger other special effects... but you'll have to discover those on your own.