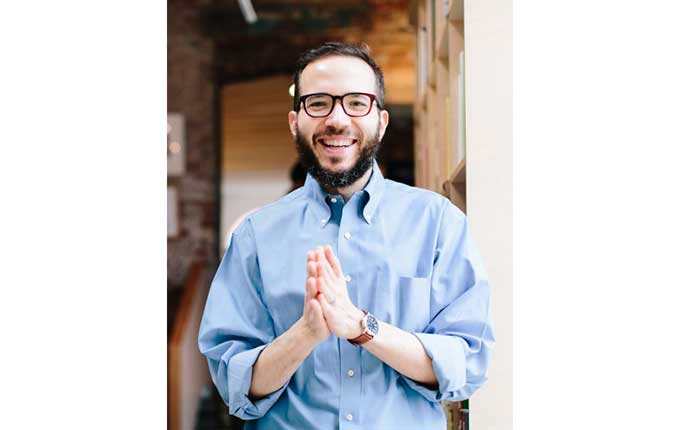 My guest this week on the Cool Tools show is David Moldawer. David is a Brooklyn-based writer and book collaborator who spent more than a decade as an acquiring editor in New York City publishing. He was an editor on a number of books I've written. He also writes a weekly newsletter for nonfiction authors and experts who aspire to be authors called The Maven Game.

Focusmate
Focusmate has been transformative for me over the last few months. It’s very simple. It pairs you with a random person via webcam and you work together for 50 minutes at a time. So it’s like having a virtual coworking partner. So what happens is you have a calendar and you pick a slot. Let’s say I want to work at 9:00 AM — it’ll say “You’re working with John or Bill or Melinda at 9:00 AM,” and at that time I click start and it brings up a typical webcam, video-chat-kind-of window, and the other person’s there sitting at a desk and I’ll say “Hi, what are you working on?” They’ll say, “Oh I’m grading something because I’m a teacher.” And I’ll say, “Okay great. I’m doing some editing because I’m a book collaborator,” and that’s it. And then we’ll just sit there and work with the webcam going. Nobody really watches each other. They move to another tab, they go to whatever they’re working on. But something about that psychological awareness that someone else is also working at the same time keeps me pinned to my work and in a state of flow like nothing else I’ve ever done.

Sorted³
I use Things, I’m on Mac — I’m on all iOS, everything. So Things is my to do list. It’s the best balance of features and simplicity and design and I keep all of my projects in there. But the problem I ran into is I really want a checklist for my day. I like to be focused on my projects. I don’t want to have to think about what happens next and that includes all my habits, exercise, meditation. I want them in one place and I had not found a tool before now that allowed me to put them all into one track. What Sorted does is it synchronizes with your calendar. So my Google calendar goes in there and you can choose which of your calendars go in there and each event on it becomes basically a task and then you can add more tasks that are actual tasks and what the beauty of it is, you can actually sort them together. Sorted will actually put it into one row. Common situation: if I had a phone call, I need to do something beforehand so I’ll put that task before. But now it turns out I don’t have time to do it. Well I’ll just move it to after that event. And so it’s all in one place. It’s all in one row and I can sort everything and I just have to worry about whatever’s next in my queue. Basically, it gives me a checklist for my entire day.

Simul
When I first started in publishing, the tradition was every version of the manuscript, the printout would be stacked in a room. We called it “dead matter.” I would go into this room of all these famous books from our imprint, and there would be like a stack of eight manuscripts representing the different versions. Because they just needed them for legal reasons. For example, if they needed to go back to a copy edit. How did this mistake get introduced? Is this plagiarism — any kind of circumstance you can imagine. And Microsoft Word’s version control is disastrous. About six months ago I Googled version control for Word. It’s a very strange thing to do, but that’s how important it is. And Simul popped up and I was kind of almost blown away. It’s a very basic site and what it does is you upload a Word file and that’s version one or you can number it whatever you like and then you can open it live. You can click on it and it will open a Word document in your local Word app, but it will be hosted on the server and it doesn’t use its own servers. That was a big part of the trust involved. It can use Google drive or I use the Microsoft functionality. Basically you log into your Microsoft account through it and it is using Microsoft’s own cloud storage. And so we will pull down that version. Just kind of like if you work at a newspaper magazine and they have that content management system, you’re pulling down the version, you make the changes and then that’s the new version. When you close it, that’s sealed, that’s version two. And then if someone works on it, version three, version four. So it is designed to work with multiple people. I just sent in a completed book proposal to an agent and it was 35 versions before it went out and I can roll it back to any of them and immediately see what was done and or go back to an earlier version. So just gives me such tremendous peace of mind.

MacFamilyTree
I’ve done 23andMe, geni.com, ancestry.com and now they’re all owned by each other. It gets very confusing. But there’s a bunch of different genealogy sites where they track your lineage, but then they also use one database. I have very limited information about my ancestry because of the war and travel between countries and those sorts of things. And I have some certain precious documents and facts, and I want them to be untouched. And these programs are very willy nilly. They’ll throw someone else’s information into your database. And there was no sense of integrity from my family tree. So I’d find out some interesting stuff about a random 13th cousin, but my own family tree would suddenly have entries entirely in Hebrew because there’s no intelligence to the way it was mushing everything together, and I got frustrated with that. I just want to keep track of like my ancestry, what I know about them and pictures and information, what jobs they had and I want it to stay put. I don’t want to have to pay this fee year after year, because I don’t see this as a hobby. MacFamilyTree is like $50, which is like old school software prices. It’s actively developed. It works really, really well. It does have cloud backup, but it’s your tree and no one is getting access to it. I don’t have to worry about sensitive information. I imported all the information from Ancestry and now it’s in there, and it does have some tools for grabbing more stuff from the internet or other databases. They’re not trying to sell me anything or upgrade me to anything. I like the fact that it’s my database and I can just keep working on it until I’ve got it as correct as I can make it.

Like a trailer to a psychological thriller along the lines of Francis Ford Coppola’s The Conversation, in which a wire-tapping detective played by Gene Hackman struggles with mounting paranoia until he has a full-on break down, this Lincoln Project video goes beyond your usual anti-Trump ad. This one isn’t for the Republicans against Trump, and […]

Republican Voters Against Trump use Reagan speech to slam Trump