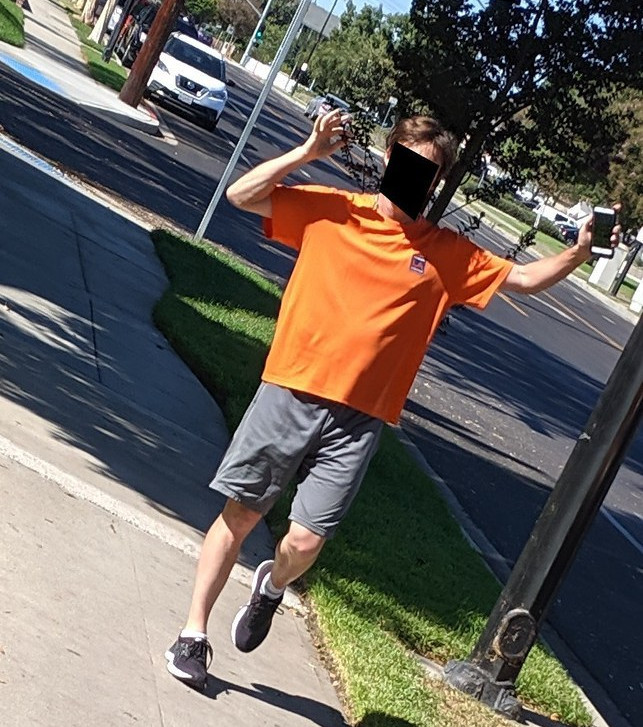 This morning, we were out on our lawn, putting up our Halloween decorations, when this fellow jogged past and said something to me. I had my headphones in and so I just waved and smiled, but then he doubled back and so I took my headphones out and said, "Hi," whereupon he began to swear and shout: "How fucking dare you have a Warren sign on your lawn?"

He continued in this vein for some time, with threats, shouts that "socialism" isn't welcome in Burbank, etc. I got this picture of him in which he may or may not be making a cute little white-power symbol (the jury's out on that one).

To be honest, it's a little disturbing to be puttering around in your own front yard on a Sunday and have an unhinged neighbor stop by to scream obscenities and threats at you. I've got it documented and I've talked to the police and it's not going to be hard for a process server to find him if I need to get a restraining order, should he return or escalate things.

However, the more I think about this, the better I feel about it. Though I actually lean more towards Bernie Sanders (I'm a donor to both campaigns), I'd be perfectly happy to fly to DC to cheer President Warren's inauguration.

And in the meantime, this woman has incoherent, unhinged, mediocre men like this guy so pants-wettingly scared that just seeing a Warren sign on someone's lawn is enough to send them into incoherent, uncontrollable, shaking rages.

So, in honor of this fine gentleman, I have just donated $300 to Senator Warren's campaign. And should I come to have to get a restraining order against this snowflake of a man, I will donate $2 to the Warren campaign for every dollar I spend in that process.

If you're interested in making a donation in this fine gentleman's honor, here's where to go.