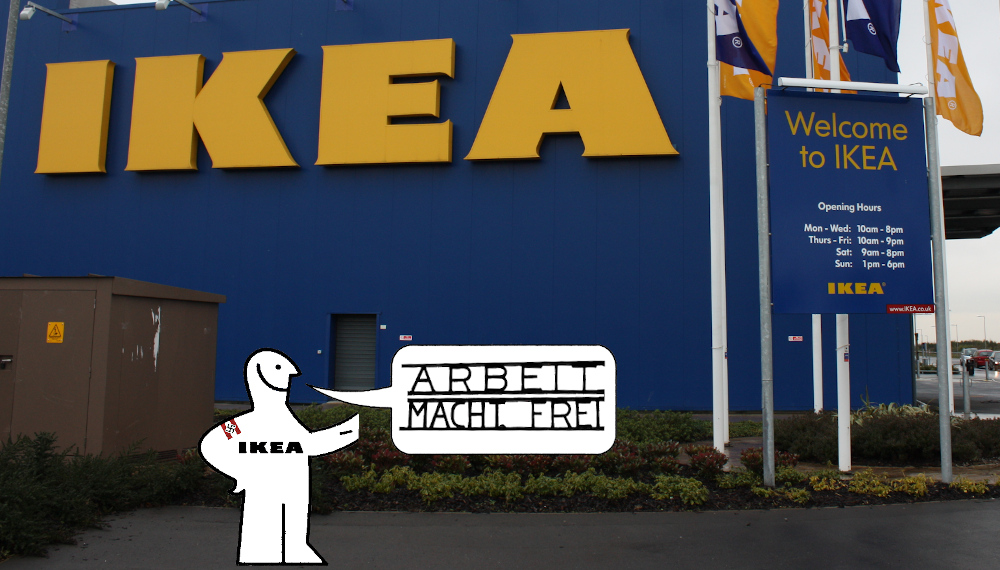 But Kamprad was also a member and patron of the Swedish Nazi party, enlisting at 17 years old in 1943, as Member No. 4,014 of Swedish Socialist Unity (Sweden's Nazis). He was an active recruiter to the Nazi cause and brought in several friends to join the party. There's no record of Kamprad ever leaving the Swedish Nazis, and as an adult, he fell in with Per Engdahl and his Swedish fascist organization, the New Swedish Movement. He hosted fascist meetings in his home, published one of Engdahl's books, and had Engdahl give a speech at his wedding in 1951, and in correspondence, Kamprad and Engdahl called one another "BB" for "best brother."

Engdahl was instrumental in smuggling Nazi war criminals out of Europe, and he knit together the post-WWII pan-European fascist network that encompassed fascists in the UK, Belgium, the Netherlands, France, Germany, Hungary, Italy, Denmark and Norway. He gathered the leaders of these movements together for a meeting in Malmo, and dubbed the outcome of this meeting the "Malmo Movement," AKA "Europäische Soziale Bewegung." The Movement published a Holocaust denial journal called Nation Europe, and Engdahl published a book that was the central text of the movement, called "The Renewal of the West" which Kamprad praised in a 1951 letter to Engdahl.

When all this came to light through Elisabeth Åsbrink's 2011 book "Och i Wienerwald står träden kvar," and Ikea headed off the negative publicity by making its largest-ever charitable donation, $51m for the UN High Commission on Refugees.

Åsbrink interviewed Kamprad in 2010 and asked him about Engdahl, and Kamprad reiterated his support for his Nazi "Best Brother," saying, "There’s no contradiction as far as I’m concerned. Per Engdahl was a great man, and I’ll maintain that as long as I live."

When did Kamprad leave the Swedish Nazi Party? No one has so far managed to find out the answer to that question. On the other hand, we know that his involvement in Per Engdahl’s fascist organization, the New Swedish Movement, continued after the end of the war. He invited comrades from the movement to his home in Elmtaryd and was regarded as their benefactor. There are letters where he is asked to donate or thanked for the latest contribution. Kamprad also acted as publisher for one of the fascist leader Per Engdahl’s books. The two had become close friends and called each other “BB”: best brother. Engdahl was invited to Kamprad’s first wedding in 1951, a quiet affair in a church outside Stockholm, at which he gave a beautiful speech.

On the Far Right Past of Ingvar Kamprad, Founder of Ikea [Elisabeth Åsbrink/Lithub]