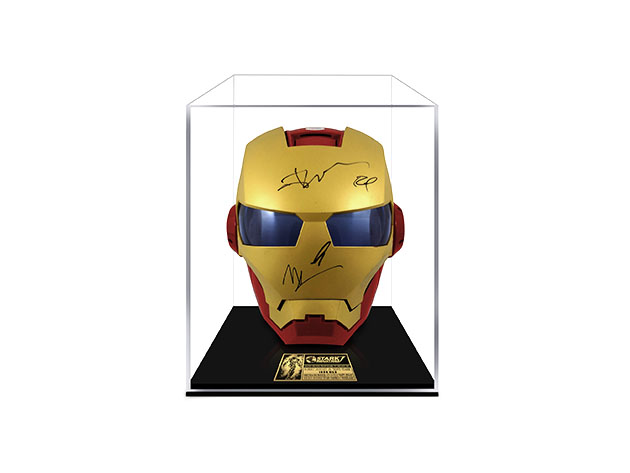 There's movie merch and then there are artifacts - one-of-a-kind items for the true fans only. These 11 items definitely fall into the latter category. We've unearthed movie art, props and other fan touchstones from the major nerd franchises of the last 50 years. Gaze upon these Star Wars and Marvel collectibles and don't worry. You're not turning into the Hulk - that's just envy turning you green.

Fans of the Armored Avenger should love this one. It's a helmet for the Mark IV armor first worn by Iron Man in the 2010 blockbuster Iron Man 2. Cool heads-up display not included, but it is signed by three major stars from the film: Jon Favreau, Mickey Rourke and Tony Stark himself - Robert Downey Jr. The PSA/DNA verified helmet is now more than 40% off the original asking price.

Bring a little thunder to your den or office with a photo of Thor signed by actor Chris Hemsworth and certified by James Spence Authentication. It's triple-matted for extra protection and surrounded by an elegant wood frame with metallic trim. Get it now for a full 37% off the retail price.

Commemorate the last of the original trilogy with this pristine "Return of the Jedi" movie poster numbered and signed by Darth Vader portrayers David Prowse and James Earl Jones, plus Jeremy "Boba Fett" Bulloch. It's a full 35% off the original retail price this month.

Beckett Authentication Services has certified this genuine find for any Star Wars fan. It's a classic poster of the franchise-defining film, signed by an impressive chunk of the cast: David Prowse, James Earl Jones, Jeremy Bulloch, Anthony Daniels, Billy Dee Williams as well as that late Kenny Baker and Peter Mayhew. Right now, you can take it home for a 38% discount.

The Peter Mayhew-signed movie still is cool enough, but this shrine to the Star Wars galaxy's greatest rogues also comes with a replica of Han Solo's DL-44 Heavy Blaster. Reenact your favorite cantina shootouts with the framed set, which is now more than 35% off the original asking price.

Family disputes don't get any more iconic than this framed moment from "The Empire Strikes Back," numbered and signed by Darth Vader himself - David Prowse. It's now available for a 35% discount.

It'll be Wakanda forever wherever you mount this photo of "Black Panther" heavy Killmonger, signed by the man himself, Michael B. Jordan. The triple-matted display will keep his stare clear and intense while you both wait for the sequel. The framed photo is now a full 36% off the retail price.

This prop fist sits behind a sturdy plexiglass case as a tribute to the angriest Avenger. And for true believers, it's certified signed by the dearly departed co-creator of the Hulk himself, Stan Lee. Pick it up now at 40% off the original asking price.

For another Marvel heirloom, there's this framed action shot of everybody's favorite wall-crawler from 2012's "Amazing Spider-Man" and a commemorative plaque, signed by Stan Lee and certified by PSA/DNA. It's now on sale at a 36% discount.

Celebrate the achievements of the galaxy's most feared bounty hunter and crunchiest Sarlacc snack with this framed photo of Boba Fett, hand signed by Jeremy Bulloch - the man behind the mask. It's certified by Beckett Authentication Services and is now 33% off the asking price.

This prop replica of Captain America's shield looks like it's straight out of the MCU except for one notable improvement: A signature by Marvel's main man Stan Lee, front and center. The PVC replica is lovingly mounted in a shadowbox frame with a metallic plaque. Get yours for more than 30% off the original MSRP.