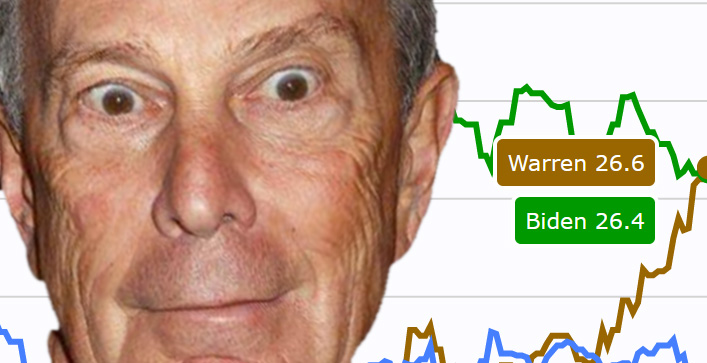 Elizabeth Warren overtook Joe Biden in one nationwide poll and the billionaires are already taking his pulse. Michael Bloomberg (~$50bn net worth) today makes clear his intentions if Biden slips away and the left-leaning Warren seems likely to prevail: Bloomberg keeps talking to allies about running for president.

Mike Bloomberg has indicated to associates in recent weeks that Joe Biden’s recent struggles are making him rethink his decision to stay out of the 2020 Democratic primary, according to people familiar with the discussions

“Bloomberg is in if Biden is out,” says one source. Biden has not indicated any desire to drop out any time soon.

Bloomberg could be in for a showdown with Elizabeth Warren, whether he runs or not, as he has been one of her biggest critics on the Democratic side.

Pete Buttigieg has done better than expected in recent polls and is, if anything, even more Billionaire-friendly than Biden. And there's that old sawhorse about liberals favoring the farthest-right over even the nearest-left. But Bloomberg doesn't have political affiliations, only vehicles. He served three terms as New York's mayor as a Republican and finally as an Independent. His interest in the Democratic primary is simple: he thinks it'd be a cheap ticket to the White House if Biden were gone.