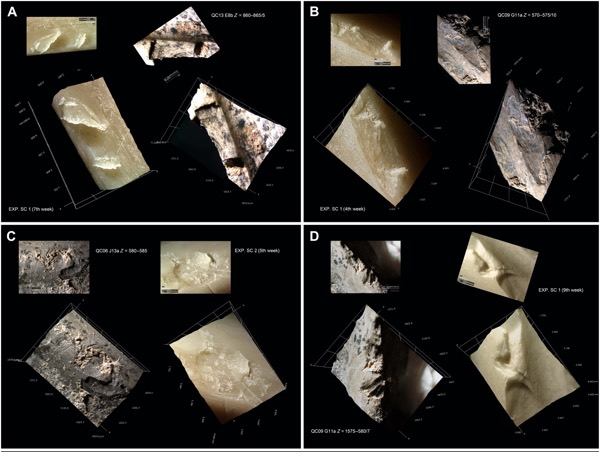 The oldest leftovers in world history have been discovered, stashed inside Israel's Qesem Cave

You'll never guess what they preserved for posterity.

Researchers have discovered the earliest evidence for storage and delayed consumption of food, deer bone marrow, at Qesem Cave in Israel.

The deer bones show clear signs that people were cracking them open to get to the marrow inside.

This previously unidentified behavior "offers insights into the socio-economy of the human groups who lived at Qesem and may mark a threshold to new modes of Palaeolithic human adaptation," the research said.

The discovery is believed to be between 200,000 and 420,000 years old, which suggests that people have been storing food as leftovers for about that long in human history.

PHOTO, TOP: Archaeological (Qesem Cave) and experimental [outdoor scenarios (SC 1 and SC 2)] damage on metapodials.
Chop marks, cortical scars, and chipped marks on the anterior (C and G) and posterior (A, B, D, E, and F) surface of metapodial shafts. Note the short and slight chop marks combined with flat incisions/sawing marks in (F) and the inclination angle in the mark section almost parallel to the bone on posterior surfaces of metapodials in (A), (F), and (G). Experimental bones in the image are labeled as “EXP” followed by the abbreviation of scenario (SC 1 or SC 2) and exposure week. The 3D images and details were generated by a KH-8700 3D digital microscope. Photo credits: R. Blasco.