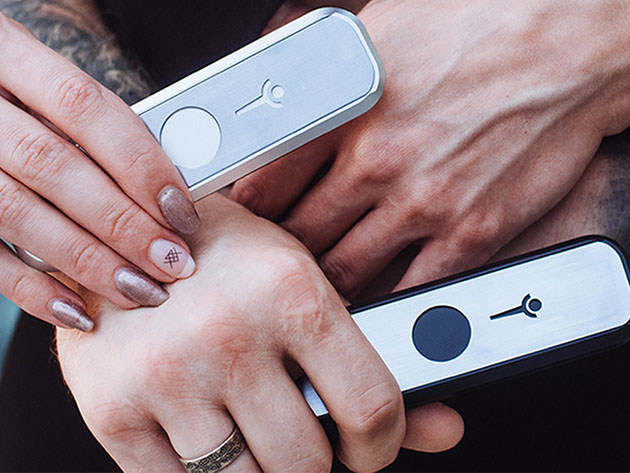 As much as vaping has taken over the market during the last decade, there's still a lot of questions about the technology, as well as health concerns that we're just now finding out about. One thing you can say about smoking: You know exactly what you're getting, especially when it comes to pipes that you can fill with your choice of herb.

Not to say that makers aren't trying to improve on the process. If you haven't picked up a pipe in a while, there's a good reason to trade up from that old glass unit you've been using since college: The Genius Pipe.

The slim design evokes what you might see in a pocket vaporizer, but that's where the similarity ends. Pop open the EVOLUTION slider on the top and you'll find a bowl ready to load. (The sliding cover also allows you to pre-load and carry your Genius around for a quick toke on the go.)

Inside, the simple but meticulously-built architecture of the smoke chamber allows for a surprisingly clean pull. That's because of a series of raised aluminum dimples that the smoke travels across on its way to complete a perfect hit. They effectively spread more air and lengthen the journey from the bowl to your mouth, cooling as it goes. It's an effect reminiscent of a water bong, only without the diluting effect on taste.

The wide, slim profile of the Genius Pipe helps with the cooling airflow, but it also gives it a striking look. Genius has a few different variations on that look, but the black and silver scheme of the High Expectations Pipe is especially attractive. Same EVOLUTION slider, same cooling effect in a sharper, dare we say professional, package.

Either pipe is compact enough to take pretty much anywhere. But if you really want to go covert, there's the Genius Mini 5.0 - a super-portable sister to the full-sized Genius that shortens the length from six to a mere five inches.

Get an old school smoke in a brand new way with your choice of Genius Pipes, all on deep discount: