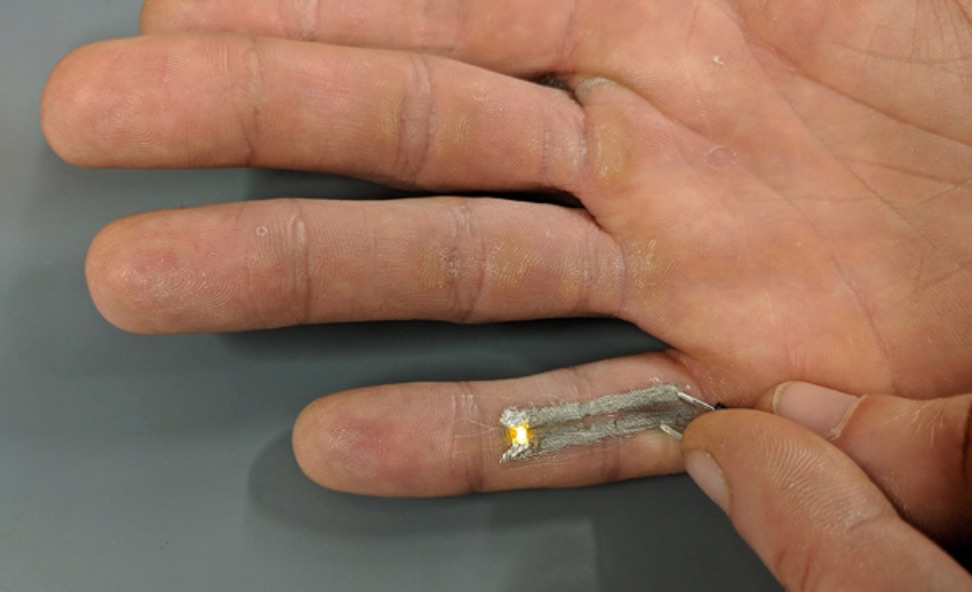 While researchers have demonstrated electronic "tattoos" that can be applied to the skin, Duke University electrical engineers have shown that electronic components can be printed directly onto the body. Typically, printable electronics need post-processing to function but the Duke researchers used an aerosol jet printer to print silver nanowire ink at near room temperature and the circuits worked immediately. On the first try, the traces connected a battery to an LED that glowed. The skin circuits wash right off with soap and water. From IEEE Spectrum:

Flexible electronics are having a moment. The sheer range of devices developed recently demonstrates the scope and speed of the field, including patches to communicate with robots, wearables to reverse baldness or detect heartbeats, and solar cells that can be sewn into clothing....

In two recent papers, Franklin, Williams and colleagues at Duke demonstrate a low-temperature technique for printing electrical components—including leads and transistors—onto delicate surfaces such as apples, human skin and paper, with no post-processing required.

“Ultimately it doesn’t matter if it’s paper or plastic or what-not, you want to be able to put your surface in, add printed, functional electronics to that surface, and away you go,” says (electrical engineer Aaron) Franklin. The new technique enables researchers to print electronic components onto a wide range of materials and reduces overall production complexity and time, he says...

“We don’t want to just print conductive traces onto human skin,” says Franklin. “We want to actually show we can do a full printing on any surface with useful, functional biosensing devices.”

For more than two decades, researchers have explored using DNA as a chemical computer. Until now though, DNA computers have only been capable of solving whatever mathematical problem they were built to tackle. Now though, researchers have demonstrated a more general-purpose DNA computer that can run a variety of chemical “programs.” From Caltech: “Think of […]

Chinese nanotechnologists injected tiny particles into the eyes of mice resulting in the rodents demonstrating “infrared ‘night vision'” that lasted for months. According to nanoscientist Tian Xue and colleagues the University of Science and Technology of China, the technology could eventually help those with certain kinds of color blindness and “provide the potential for close […]