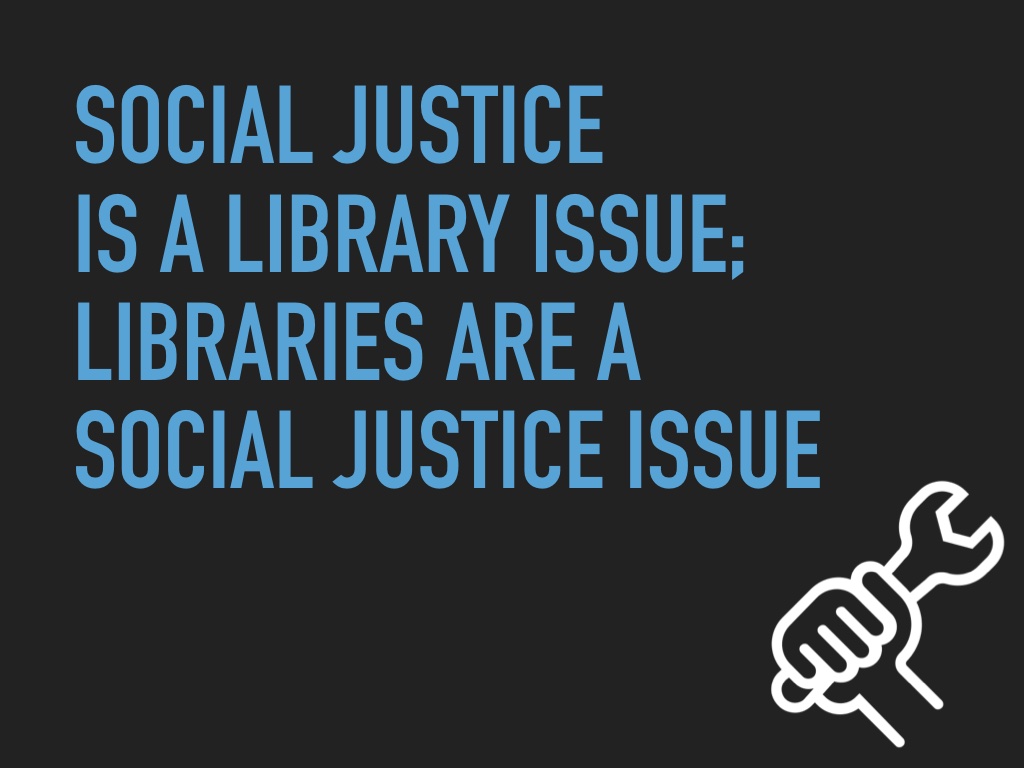 The talk crib and slides are all online but the long and the short of it is that being a place devoted to universal access to all human knowledge is, and always has been, a radical act -- and putting that into practice requires specific skills and policies that librarians all over the world have spent generations creating, and are still inventing today.

So my response to people asking why I am making things political is often just to restate that I am just trying to help people achieve equity which is not the same as equality. Equality always implies that we are all starting from the same place, so it's fine if we have, from today forward, equal opportunities. This ignores a great deal of history. But the awkward part is that sometimes getting at this equity can mean rebalancing things from where they are now. Doing this in response to social issues is considered social justice. OK then.

As I said before, representation matters. Libraries are, nominally for everyone, but does everyone feel included, does everyone feel like the library is the place for them? My public library specialty is outreach. Basically (at least partly) figuring out who is in your community, subtracting everyone who is coming in to the library and figuring out if there is anything you can do about the ones who don't come in. Maybe not... but probably there are things you can be doing. I'm not going to say it's not tricky but one of the most basic things that helps people feel included is safety. Safety from harassment, safety from judgement.

And in some cases, the world as many people understand it has changed. And this is an opportunity to say "we recognize everyone and want them to be included." and you can try things, work them out, maybe one set of signs doesn't work because it's too cutesy (who is that person?), or too vague (is there a urinal?) and maybe it takes you a while to settle on one option.

...and this isn't just "yay progressives" People may have religious reasons to feel a men-only or women-only bathroom is appropriate, so keeping those options is *also* a way of supporting diversity. So talk to them, have transparency in your process.