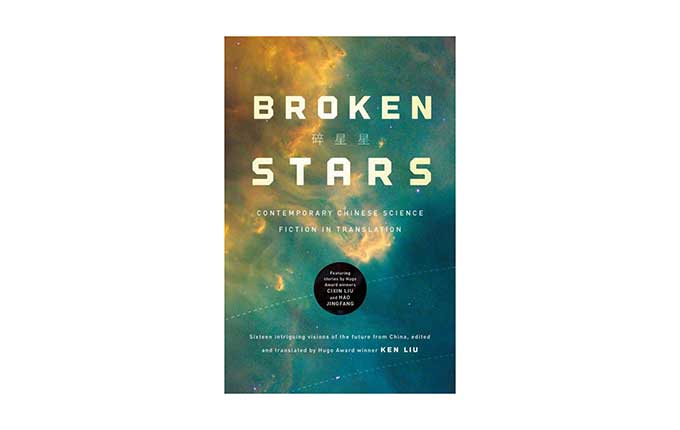 Recomendo is weekly newsletter that gives you 6 brief personal recommendations of cool stuff. I write it with Kevin Kelly and Claudia Dawson (my colleagues at Cool Tools Lab). You can subscribe to it here. We also published a book with our favorite Recomendo tips. To give you an idea of what Recomendo is like, here's the latest issue of the newsletter:

More Chinese science fiction
A red-hot area in science fiction these days is China. Like many fans who enjoyed The Three Body Problem, I wanted more. So the translator of that mega hit, Ted Liu, has translated two volumes of Chinese short stories with a sci-fi/fantasy focus. The first anthology, Invisible Planets, is a sampler offering lots of magical realism, fantasy and a few hard-science pieces. The second, Broken Stars, has more speculative fiction, and feels more Chinese. As in any anthology, the quality is uneven, but a few stories are standouts and I got a solid feel for this embryonic movement. — KK

Cut out everything that’s not surprising
Derek Sivers was the founder of CD Baby and maintains an interesting essay blog. One of his recent posts offered good advice for writers and speakers: “People only really learn when they’re surprised. If they’re not surprised, then what you told them just fits in with what they already know. No minds were changed. No new perspective. Just more information. So my main advice to anyone preparing to give a talk on stage is to cut out everything from your talk that’s not surprising.” — MF

Shower with fresh Eucalyptus
I’ve been hanging fresh Eucalyptus in our shower because it’s said to reduce sinus inflammation, which I struggle with, but mostly because it makes showering feel like a spa experience with it’s soothing scent and how it looks so pretty. I’ve tried both the Silver Dollar Eucalyptus, which Whole Foods often has in stock, and the more aromatic Baby Blue Eucalyptus, which I order on Good Eggs. Here is a good how-to article. You’ll need some natural jute twine to hang it up. This is what I ordered. — CD

Super easy paint touchup
After you finish painting a room, pour a little of the left-over paint into one of these small BIBR touch up bottles. One for each color. The plastic bottles contain a small applicator brush inside (plus a marble to shake/stir the paint) which makes it super easy to break it out to touch-up as things happen. Gareth Branwyn suggests keeping the touchup bottle in a drawer in the room itself, making it a no-brainer to grab when needed. Touch up will never happen when the paint is at the bottom of a can in the basement. — KK

A better multicooker than the Instant Pot
The Instant Pot multicooker has become an internet sensation, with recipe books and YouTube videos devoted to it. I also was a fan of my Instant Pot until it died last month and I switched to a Zavor Lux 6-Quart Multicooker ($160). It’s superior to the Instant Pot on at least three counts. First, the top lid doesn’t get so hot that it will burn you if you touch it. Second, it heats much faster, which makes a huge time difference when pressure cooking a meal. Third, the silicone gasket on the lid is braced so it doesn’t sag like it does on the Instant Pot, which is a common issue and prevents the Instant Pot from achieving a high enough pressure. The Zavor costs a bit more than the Instant Pot, but it’s worth it. – MF

Visual guide to portion sizes
All the time spent in the kitchen with my mother or grandmother I never once saw them measuring anything, and maybe it’s a Hispanic culture thing, but I learned even less about appropriate food portions. So now I’m working on getting better at eyeballing portion sizes so that I don’t over serve myself. This chart helps. — CD

This is the Cadillac of cat litter scoops

I bought a Durascoop cat litter scoop about five years ago because the little plastic scoop I’d been using for a couple of years had gotten flimsy from use and would often buckle at the handle. The Durascoop is made from cast aluminum and will never bend. It easily shaves off hardened clumps of litter […]