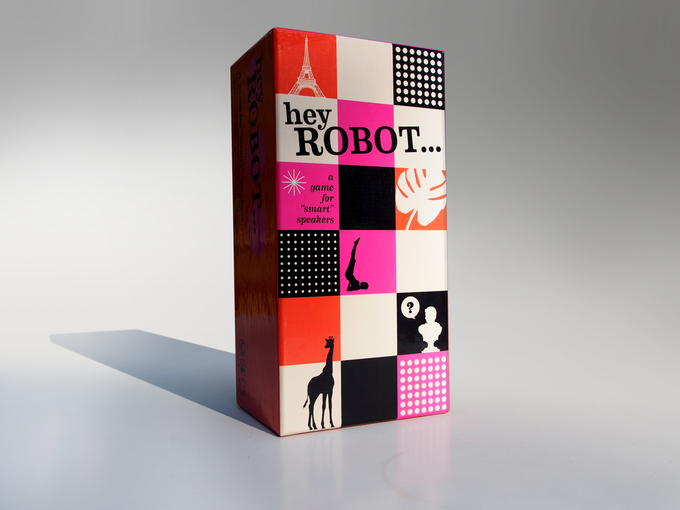 This is such a cool idea for a game. In Hey Robot you are challenged with asking Alexa (or another voice assistant device) a question that will make it say a certain word.

At the beginning of the game, you deal out a grid of cards with words on them. Then teams alternate trying to capture a word by asking The Robot a question that will get them to say that word in their response. (They can't say any form of the word in their question.)

After a brief huddle, they decide to ask: "Alexa, what is a creature that is scared of sunlight?" hoping Alexa will say the word "vampire" in her response. Instead, she'll tell you about heliophobia — the fear of going out into the sun. Groan. Because they missed with their question, Team 1 puts a bonus point token on the VAMPIRE card, increasing its value.

Now it's Team 2's turn. After some deliberation, they choose VAMPIRE as well. They ask: "Alexa, who is Dracula?" Alexa answers,

Boom! Everyone cheers because Alexa said the word "vampire" in her response. Team 2 gets three points -- the two points printed on the card, plus the additional bonus point token. Now they must add a bonus point to one of the four cards touching the card they just captured.