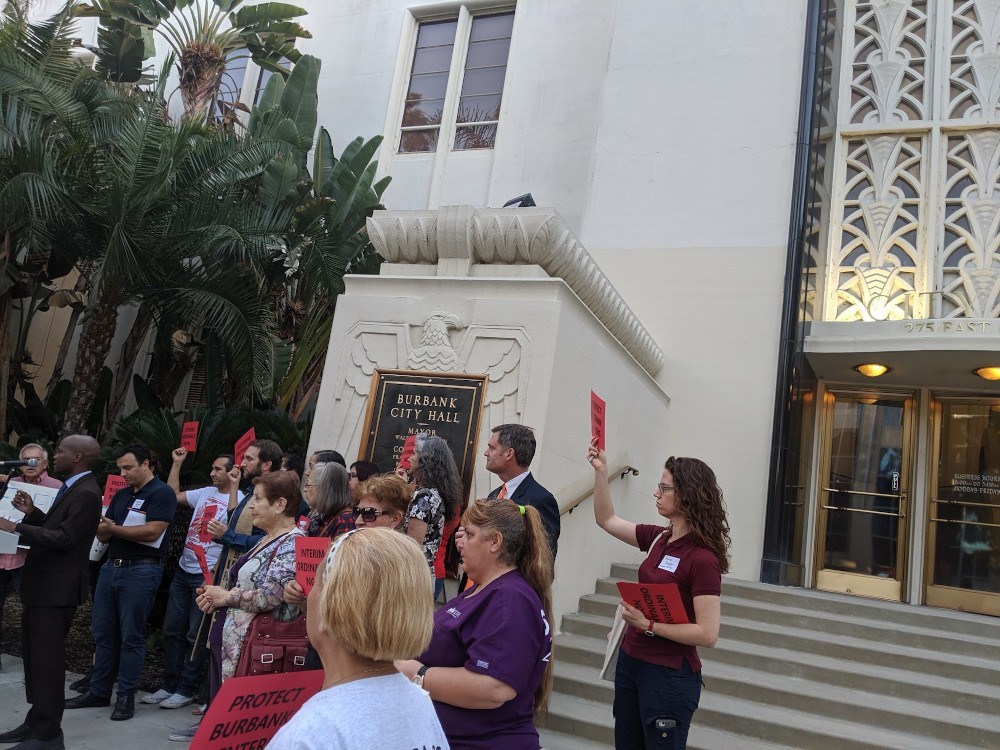 The passage of AB1482, which limits annual California rent-increases to 8%, is an important step to solving California's urgent housing crisis, but thanks to lobbyists for the massive private-equity landlord industry, the bill contains a huge loophole: if landlords evict their tenants before January 1, they can effectively escape the bill's strictures.

In most California cities, this loophole is relatively minor, because landlords can't simply evict good tenants who pay their rent on time and treat their homes with respect. But some cities -- like Burbank, where I live -- allow for "no fault" evictions, in which landlords can simply evict tenants on 60 days' notice, even if they have never missed a day's rent.

The combination of the deliberately introduced loophole in AB1482 and Burbank's deficient tenant protection law has put the city's renters -- about half of our residents! -- at dire risk of eviction. Whole buildings' worth of people -- retirees, families with young kids enrolled in local schools -- have been evicted, with a deadline to vacate during Christmas week.

Last night, I spoke at a City Council meeting calling for an emergency measure to stop the evictions. Despite my remarks and those of dozens of other Burbankers, the council voted 3-2 against the measure.

The Burbank Tenants Rights Committee is now collecting signatures for a line-item initiative for our 2020 ballot that introduces comprehensive tenants' protection for Burbankers.

The Committee is soliciting donations to pay for the initiative, including paying wages for people to collect 6,200 signatures to get the issue on the ballot.

Ordinance allows evictions based on at-fault and no-fault, as listed. Meaning Landlord must give one of the stated reasons to evict and no longer may evict for no reason. Examples of at-fault: nonpayment of rent; violation of lease and failure to cure; creation of a nuisance or other illegal activity in the unit, rental complex or within 1000 feet of; refusing Landlord reasonable access. Examples of no-fault: Landlord demolishing or substantially rehabilitating unit; seeking to recover unit for occupancy by a resident manager or specified family member; permanent removal of unit from rental market. If eviction is no-fault, Landlord must pay specified relocation payments to the tenants; all of whom split the relocation fee. Fee ranges from $7,750 to $20,050 depending on the length of tenancy and type of tenant - elderly, disabled. Commission may set new relocation fees that are no less than fees in Health and Safety Code §17975.2. In all cases, Landlord must give proper notices. Ordinance further protects against retaliatory actions or evictions, involuntary vacancies and providing a mechanism for Landlord to buyout the tenant.

Rent regulations apply to units built before February 1, 1995. Ordinance allows an annual increase in rent based on the Consumer Price Index, but no greater than 7% per year. First increase is effective September 1, 2021, calculated on the September 30, 2019 rent or rent initially charged post September 30, 2019 occupancy. There are special noticing provisions. Ordinance does not currently control initial rent amount, but may do so if state law changes. Landlord may petition Commission for a rent increase to ensure a Fair Return or tenant may petition for reduction based on specific criteria.

Commission is composed of 5 members with no fewer than 2 tenants and no more than 2 residential rental property owners, appointed by the City Council. Commission implements and oversees Ordinance; develops rules and regulations to govern; produces publications; determines annual rent adjustments; adjudicates rent petitions and establishes penalties for noncompliance by Landlords. Commission establishes its own budget, hires staff and/or outside legal counsel, initiates litigation. A fee charged to Landlords, set by Commission, will fund cost of the Commission and administration. Ordinance provides a new bureaucratic unit of City government, independent and outside of the powers granted by City Charter to City Council, City Manager and City Attorney.