I've tried a lot of different kitchen knife sharpeners, and this cheap one is my favorite 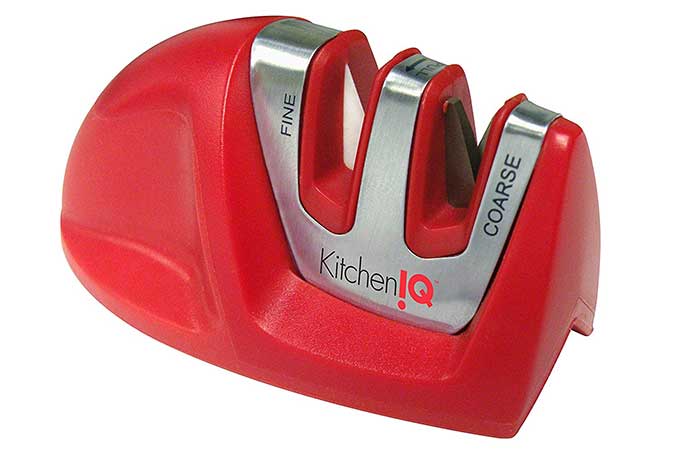 $11.19 on Amazon. I've been using one for years and it's my favorite knife sharpener.  I like it because of the way you hold it with one hand along the edge of a kitchen counter and with the other hand you draw the knife through the slots. It's a safe way to sharpen a knife and I don't see how someone could make a mistake and hurt themselves. One slot is "coarse" and the other is "fine." I typically use the fine slot every week or so to restore the edge on a knife. I rarely use coarse because it removes quite a bit of steel from a knife, but sometimes that's just what's needed to sharpen a dull knife. Over 11 thousand people have reviewed this sharpener on Amazon, and has an average star rating of 4.3.

I have a similar Aukey charger and it’s great for travel or in a room where you want to charge a lot of devices at once. It has 2 AC Outlets and 4 USB ports. I just bought this model for my bedside table. Use code 8US35ZN2 at Amazon to get it for a discount.

This metal Swingline stapler isn't red, but it's cheap

My red Swingline stapler has been sparking joy since 2008, but if you don’t care about the color, this black version is just on Amazon. At that price, you won’t be tempted to set your building on fire should someone take it from you.