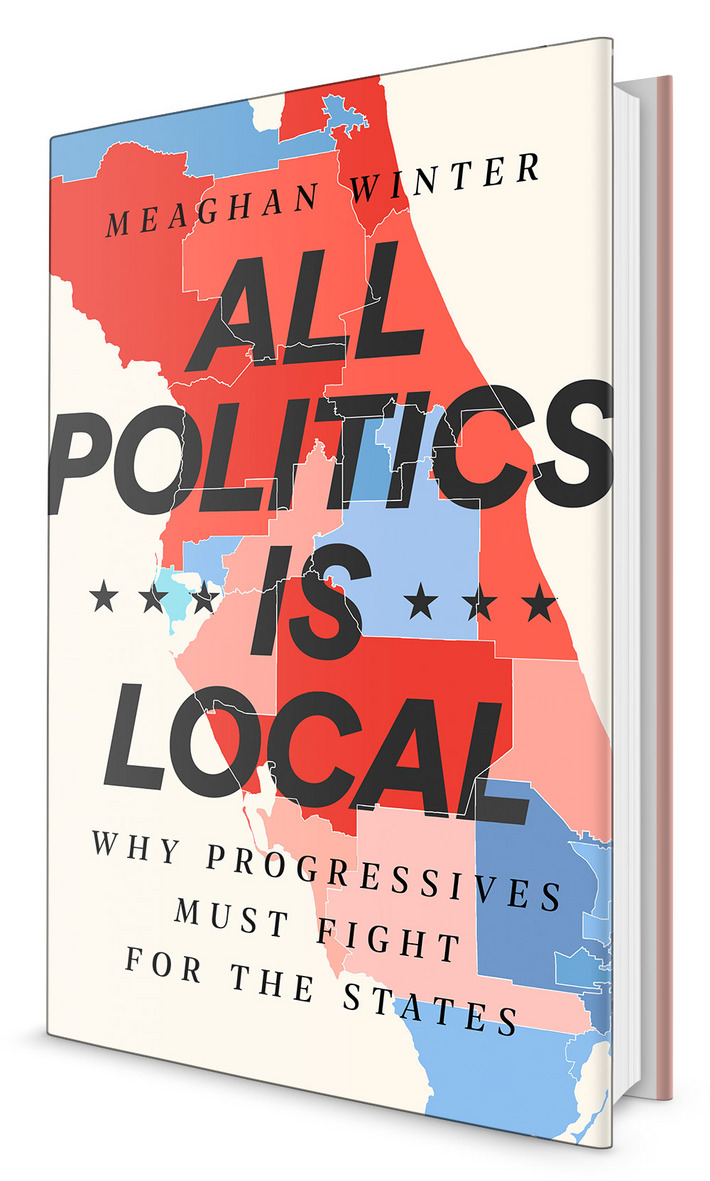 Meaghan Winter is the author of All Politics Is Local: Why Progressives Must Fight for the States, a new book that analyzes how Democrats lost control of the vast majority of US state legislatures and governorships, why this is a crisis, and what to do about it next.

Winter makes a pretty compelling case for state parties as crucial to national progressive politics: "When state Democratic Parties are weak, they can’t block assaults on abortion rights, or voting rights, or collective bargaining rights. They can’t serve as talent incubators for future members of Congress, and that, in turn, weakens the national party."

But more important is her analysis of how the Republican project to hijack the states -- through gerrymandering, voter suppression and wedge issues -- came about, and why the Democrats have struggled to counter it.

In an interview with Sarah Jones in New York Magazine, Winter says that the GOP takeover was financed by deep-pocketed one-percenters making shrewd, self-interested calculations about how their investments would pay off, and that this drove them to sustain their funding, year after year, to create long-term projects with skilled, coordinated leaders who were able to court (and frighten) a base of turkeys-voting-for-Christmas poor people who would support rich peoples' further enrichment.

By contrast, one-percenters who fund the Democrats are acting out of a sense of noblesse oblige, or "moral whims," and they are thus dilettantes whose funding is both erratic and arbitrary, and therefore unable to create and sustain those strong movements.

This is in contrast to the historic funding of progressive causes -- basically, trade unions -- who were able to counter the long-term thinking of plutocrats with long-term projects for workers.

What's more, the rise and rise of small-dollar-donor funded juggernauts like Bernie Sanders points the way to a new kind of treasury for the left, one based on pluralistic, robust movements, not "moral whims."

You write that liberal donors love “a program with a unique, special air.” And that the left is largely guided by the moral whims of rich people, whereas the right is guided by rational business decisions. In your reporting, did you identify the point where this became true of the left?

There was a moment in the ’60s and ’70s when the right became more politicized in their institutional giving. And by the right, I don’t actually mean the Republican Party. I mean entities that were more extreme than that, like libertarian think tanks and people and donors who are reacting to the civil-rights movement. They decided to take a much more radical approach, whereas everyone else decided that they were going to take a safer approach, which was funding direct service rather than taking a more politicized approach.

Do you think that big liberal donors, in comparison to big right-wing donors, perceive their roles and perceive power differently?

Institutions on the right have an incentive to give because they’re going to get a return on their investment. If you are the Koch brothers and you spend a million dollars on lobbying, you’re going to get tenfold the amount of money back by pushing a piece of legislation because you’re going to get a tax break or you’re gonna get to drill oil, whatever you want. Where liberal donors, compared to Democrats at large, tend to be more socially liberal and economically conservative. And because of a bunch of complicated campaign-finance laws that I won’t go into now, there’s a lot of incentive for them to give to interest groups.

That is quite different than sustaining long-term organizing that unifies people across issues and creates an economically driven social movement, which I think ultimately could be more successful in uniting people across demographics, across the culture wars. People like Tom Steyer don’t have an incentive to give money to a bunch of people who are now disenfranchised and who, if they actually had power, would change his tax code and take away a lot of his social status.