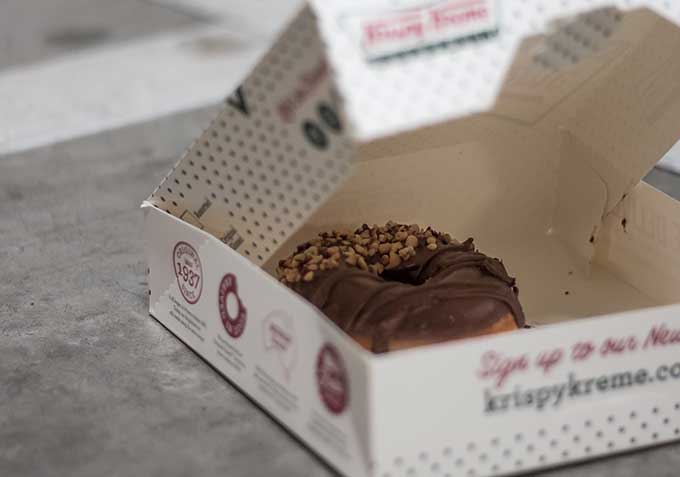 Jayson Gonzalez has learned that if you buy a donut from Krispy Kreme, you don't actually own it.

According to AP, Gonzalez is a 21-year-old accounting student in Minnesota, where there are no Krispy Kreme stores. He's been regularly driving 270 miles to a Krispy Kreme store in Clive, Iowa to buy 100 boxes of donuts (a dozen in each box) at full retail price, loading them in his car, and delivering them to grateful Krispy Kreme lovers in Minnesota. His customers pay between $17 and $20 per box (they usually go for $8 to $12 a box). But when The St. Paul Pioneer Press wrote an article about the enterprising donut reseller, the corporate bigwigs at Krispy Kreme found out and they are now trying to put a stop to it.

From the Twin Cities Pioneer Press:

Less than a week after a Pioneer Press article ran about his eight-hour road trips to Iowa to retrieve the doughnuts, Jayson Gonzalez received a phone call from Krispy Kreme’s Nebraska office ordering him to stop selling their doughnuts in Minnesota. All Krispy Kreme stores left Minnesota 11 years ago.

“I know they told one of the big managers in Nebraska directly, and he called me,” said Gonzalez, of Champlin. The company’s corporate office is in North Carolina. “He said corporate told him to ‘cease’ and ‘desist.’ ”

Krispy Kreme didn’t explain the move, but promised to investigate.

“We have become aware of Jayson’s situation, which involves one of our well-intended locations, and are looking into this,” the company said in a statement Sunday. “We appreciate Jayson’s passion for Krispy Kreme and his entrepreneurial spirit as he pursues his education.”

Photo by Kelli McClintock on Unsplash