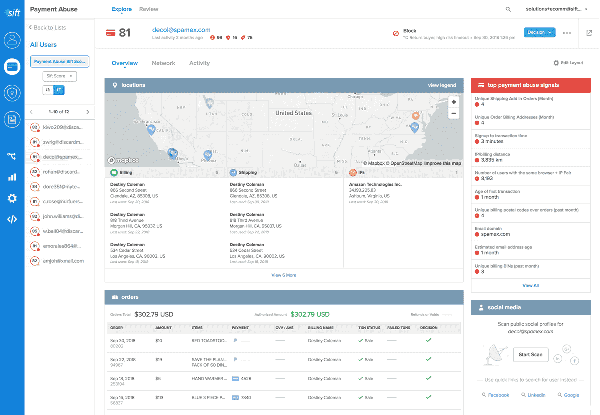 ALmost nobody reads terms of service agreements when they use online services. When you click the "I AGREE" box you give these companies permission to sell and share your data with third parties. A company called Sift amasses that data and has huge files on everyone. Kashmir Hill asked Sift for her consumer score and what she found was "shocking."

The [Wall Street] Journal’s Christopher Mims looked at a company called Sift, whose proprietary scoring system tracks 16,000 factors for companies like Airbnb and OkCupid. “Sift judges whether or not you can be trusted,” he wrote, “yet there’s no file with your name that it can produce upon request.”

As of this summer, though, Sift does have a file on you, which it can produce upon request. I got mine, and I found it shocking: More than 400 pages long, it contained all the messages I’d ever sent to hosts on Airbnb; years of Yelp delivery orders; a log of every time I’d opened the Coinbase app on my iPhone. Many entries included detailed information about the device I used to do these things, including my IP address at the time.

Sift knew, for example, that I’d used my iPhone to order chicken tikka masala, vegetable samosas and garlic naan on a Saturday night in April three years ago. It knew I used my Apple laptop to sign into Coinbase in January 2017 to change my password. Sift knew about a nightmare Thanksgiving I had in California’s wine country, as captured in my messages to the Airbnb host of a rental called “Cloud 9.”

The data that companies like Sift and others collect and analyze will be used as inputs by algorithms that make unappealable life changing decisions about you without your awareness, consent, or control.

The end of the article has instructions for getting your data from Sift and other similar companies.