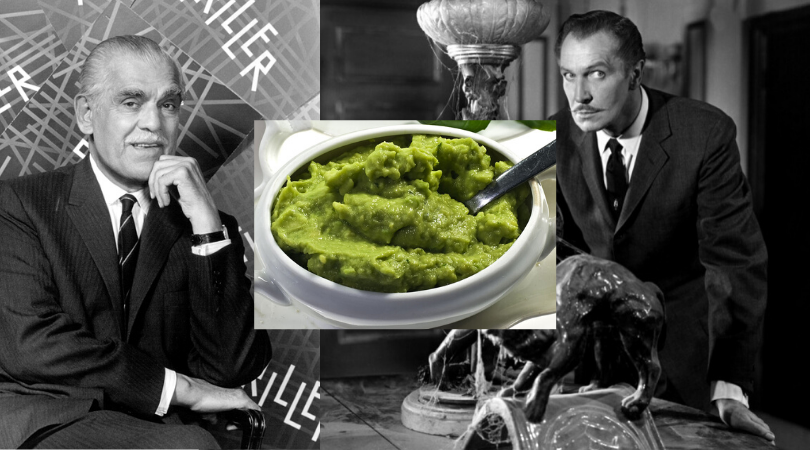 It was much easier to trace the source for Vincent Price's recipe, which was published in a cookbook that he and his wife put out in 1965. He prefers his guac with coriander as well as…Worcestershire sauce and mayonnaise?

1. Peel and seed: 2 large avocados. Save the seeds. Mash avocados with a fork.

2. Add: 3 tablespoons lemon juice, 1 small onion, chopped fine, 1 small green chili, chopped fine, 1/8 teaspoon of ground coriander, salt to taste, 1/2 clove garlic, minced, 3 tablespoons mayonnaise, 1 tomato, peeled, seeded, and chopped, 1 teaspoon Worcestershire sauce (optional), and a dash of cayenne pepper (optional).
3. Leave the avocado seeds in the mixture until ready to serve, and they will prevent discoloration. If you like a very smooth guacamole, remove the seeds and put mixture into blender container and blend on high speed for about 8 seconds before you are ready to serve it.

I can imagine a world where this is fine, in that overly-smooth-store-bought kind of way. I just personally prefer not to live in that world. Kat Kinsman at Extra Crispy tried to re-create both recipes, and said of Price's mayo-slop: "If I'd been served this blindfolded, I'd have assumed that someone was shoveling Big Mac Secret Sauce onto my tongue, and that's just horrifying when you've been promised guacamole."

I gave my mother my treasured 5-quart Lodge deep skillet and lid when I found a lovely antique to restore. I've been using it while visiting with them. It was no easy thing when I gave my Mom my Lodge chicken pan. I had been using it for ages as my primary skillet and perfected […]