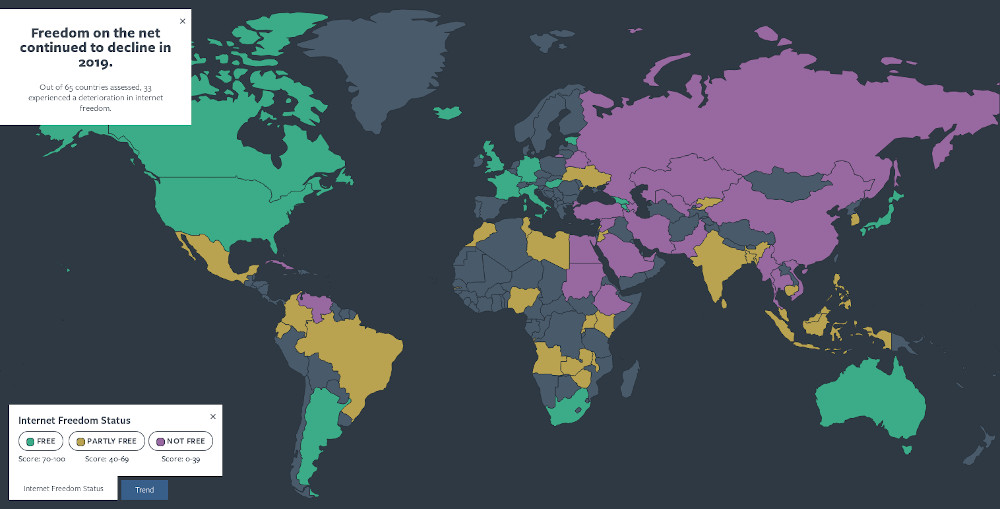 Freedom House, a US-government-funded nonprofit think-tank whose mission is to spread democracy, issues an annual "internet freedom" report; this year, for the ninth consecutive year, the report says that internet freedom has declined, and it's all thanks to social media.

The report surveys 65 countries (covering 87% of the world's internet users), and in 38 of them Freedom House says that social media has been used by political leaders who "employed individuals to surreptitiously shape online opinions" that mixed "authentic users'" views with "fraudulent or automated accounts."

The report describes how social media has been mined by intelligence services who engaged in "the collection and analysis of vast amounts of data on entire populations," creating a "sharp global increase in the abuse of civil liberties and shrinking online space for civic activism."

The report notes that while 33 countries' internet freedom has declined since last year, 16 countries have undergone net improvements. The worst declines came from "Sudan and Kazakhstan followed by Brazil, Bangladesh, and Zimbabwe."

Freedom House warns that "Emerging technologies such as advanced biometrics, artificial intelligence, and fifth-generation mobile networks will provide new opportunities for human development, but they will also undoubtedly present a new array of human rights challenges."

Internet freedom declined in the United States. While the online environment remains vibrant, diverse, and free from state censorship, this report’s coverage period saw the third straight year of decline. Law enforcement and immigration agencies expanded their surveillance of the public, eschewing oversight, transparency, and accountability mechanisms that might restrain their actions. Officials increasingly monitored social media platforms and conducted warrantless searches of travelers’ electronic devices to glean information about constitutionally protected activities such as peaceful protests and critical reporting. Disinformation was again prevalent around major political events like the November 2018 midterm elections and congressional confirmation hearings for Supreme Court nominee Brett Kavanaugh. Both domestic and foreign actors manipulated content for political purposes, undermining the democratic process and stoking divisions in American society. In a positive development for privacy rights, the Supreme Court ruled that warrants are required for law enforcement agencies to access subscriber-location records from third parties.