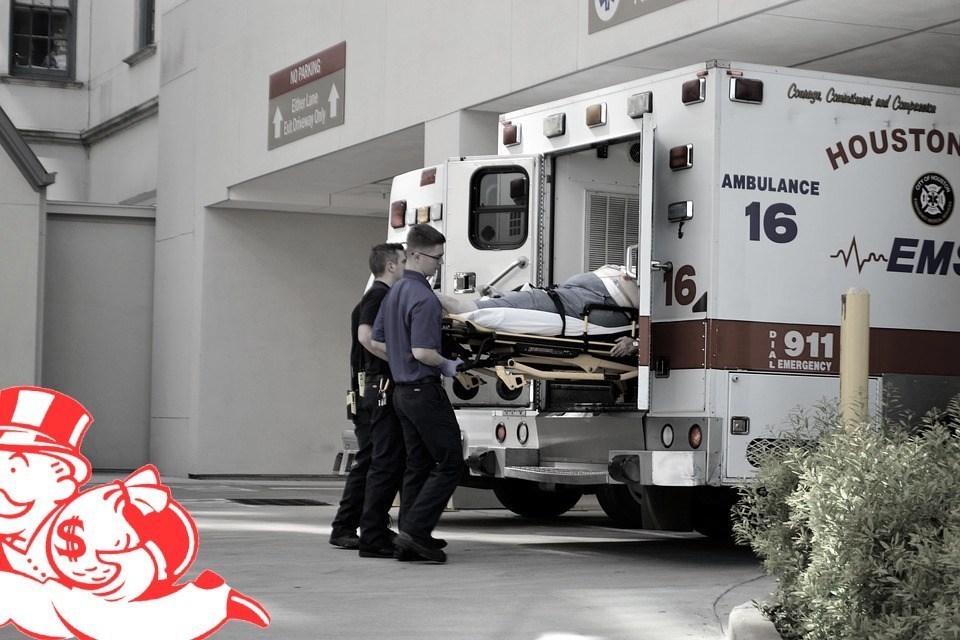 Surprise billing -- when your urgent or emergency medical care results in massive bills that your insurer won't cover -- are a life-destroying phenomenon for an increasing number of Americans, who not only can't shop around for an emergency room from the back of an ambulance, but who also have no way to learn in advance whether their visit will generate five- or even six-figure bills.

Here's how that happened: private equity funds have been on a purchasing spree, buying up the private doctor's groups that ERs, hospitals and urgent care centers contract with (part of the MBA-driven mania for hollowing out all social institutions into procurement systems that buy everything from outside contractors).

Once a private equity "roll up" strategy has cornered the urgent/emergency medical care providers in a city or region, they just...raise prices. Seriously, it's that simple: corner the market, raise prices.

This is happening up and down the health-care stack: two thirds of air ambulances are now owned by three private-equity-backed funds, and while the number of air ambulances has gone up, while demand has remained flat, the price of an air ambulance has doubled in a decade. The helicopter that takes you to a hospital today might cost $56k, of which your insurer will expect you to pay $44k.

In 2018, private equity did about 800 health-care acquisitions, totalling more than $100b, leaving 22% of US physician markets in a "highly concentrated" state.

But just because the deals totaled to more than $100b, that doesn't mean that PE firms spent that much. As is common with PE deal, the majority of these were debt-financed: PE funds borrow money against the firms they're buying, and use that money to buy those firms (!), then pay themselves huge dividends and leave the firms in a state of financial distress, which is why so many PE-backed firms end up bankrupt, to the detriment of their suppliers, workers and customers.

PE-backed health-care firms are already experiencing the first waves of bankruptcies, like Manorcare, a chain of nursing homes that the Carlyle Group bought for $6.1b in 2007, borrowing $4.7b against Manorcare's assets at the time. After the deal closed, Carlyle extracted $1.3b cash from Manorcare, then cut costs to balance the books. What followed was a decade of horrific health-care drain-circling, as the elderly people under Manorcare's roofs experienced neglect and abuse so that the chain could keep up its debt payments. Finally, the company filed for bankruptcy.

Watch for more of the same in lucrative, PE-cornered markets like dialysis, dominated by two PE firms, who have 77% of the market between them. One of these funds, Davita, had to pay $895m last year after a whistleblower leaked data showing that it had been gouging the US government on dialysis bills.

Even dying provides no escape: the funeral industry is also now highly concentrated, thanks to private equity rollups of small chains and independent firms, and prices are skyrocketing.

That's the bad news. Here's the good news: extractive monopolies are now affecting so many people, in so many ways, that the politicians who are willing to say the problem's name aloud -- monopolies -- can draw supporters from across a wide range of constituencies: eyeglass wearers, pro wrestling fans, people with severe allergies, people with diabetes, renters, screenwriters, and Disney fans.

Before the term "ecology" was coined, there were a number of fragmented campaigns to save whales or owls, preserve fresh water or fresh air, fight ozone depletion or preserve forests. But there was no coherence to these struggles, no common cause. The term "ecology" welded together these disparate causes into a single movement, one that is filling city streets with millions of partisans today.

The rise and rise of monopolies backed by private equity has been a catastrophe for prosperity, growth, equality, and the majority of peoples' chances to survive and thrive in America. All of those people are angry about the tentacle of monopoly that has wrapped itself around their throats. Once we create a political movement that traces all those tentacles back to the same rapacious monster, we can come together to slay it.

Unlike venture capital, which injects equity into companies and funds new ventures, or initial public offerings, which raise actual equity, private equity is purely extractive. Studies have shown that private equity leads to higher defaults, its claims to increase productivity are a sham, and it causes higher rates of job losses and firings in target companies as well as lower wages. (Unsurprisingly, industry-funded studies are much more sanguine.) But perhaps the most damning indictment of the private equity model is that their returns are overstated and their performance simply not as good as they lead investors to believe.

You do not need an MBA from Wharton to know that loading up companies with debt will lead to bankruptcy. Research shows that private equity funds acquire healthy firms and increase their probability of default by a factor of 10. They are the antithesis of conservative management.

Private equity groups have been behind most of the recent bankruptcies in local newspapers, retail, and grocery stores. In fact, analysis by FTI Consulting found that two thirds of the retailers that filed for Chapter 11 in 2016 and 2017 were leveraged buyouts. The pirate equity groups load debt onto the companies and dividend out the cash to themselves, which often leads to bankruptcy and a trail of job losses and underfunded pensions. Heads they win, tails the company, employees, and suppliers lose.