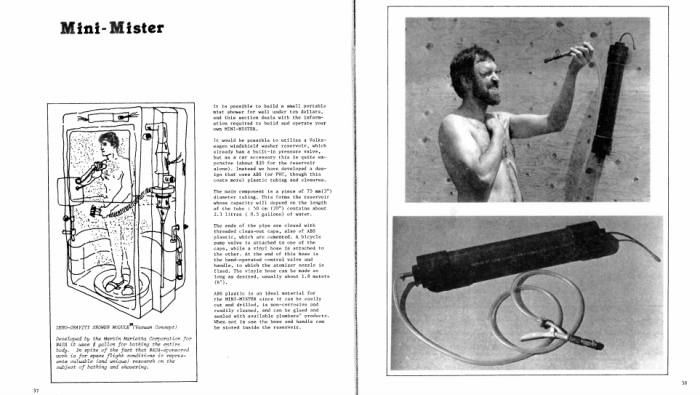 That doesn't mean we have to give up showers, though. "Mist showers" use multiple misting heads to deliver an all-over body wash with vastly less power/water-consumption. They date back to Buckminster Fuller, who invented a "fog gun" for washing up in his Dymaxion houses back in 1936.

Mist showers are very efficient: even with five misting heads, the flow is a mere 2l/minute, a mere 20% of the output from "low-flow" shower-heads, one twelfth of the flow from a "rain shower." Three nozzles brings the water rate down to 1l/m.

A young Dutch designer called Jonas Görgen has developed a kit to convert any shower into a mist shower.

Mist showers sound like a way to be sustainable without giving up on physical comforts or cleanliness.

The use of the shower to treat oneself seems to be incompatible with a drastic reduction of its water and energy use. However, there is a technology that might just do that: the mist shower. A mist shower atomizes water to very fine drops (less than 10 microns), which greatly reduces the water flow. Buckminster Fuller invented the first one in 1936 as part of his Dymaxion bathroom (he called it a “fog gun”). The idea was taken up again in the 1970s, when several trials and experiments were conducted with both atomised hand washing and showering.

NASA developed a mist shower with a hand-held, movable nozzle that incorporated an on-off thumb controlled water valve attached to a flexible hose. The average water use for a nine-minute shower was measured to be 2.2 litres, which corresponds to a water flow of only 0.24 litres per minute. [6] The Canadian Minimum Housing Group developed and tested several mist showers and obtained a flow rate of 0.33 liters of water per minute. [7]. In both cases, swab tests of bacteria on the skin showed that mist showers clean the body just as well as a “normal” shower of the same duration – using 30 to 40 times less water.

Jonas Görgen, a young designer who graduated from the Design Academy Eindhoven in 2019, became fascinated by the history of the mist shower and decided to build one himself. Compared to earlier mist showers, Görgen has improved the concept in two important ways. First, he developed a kit that can turn almost any shower into a mist shower with very little effort. Second, in contrast to earlier experiments, his mist shower uses not one but three to six nozzles. This turns a functional but very basic mist shower (using only one nozzle), into a pleasant experience that feels just as comfortable and invigorating as a “normal” shower.