Ms. Tanqueray on Humans of New York is everything 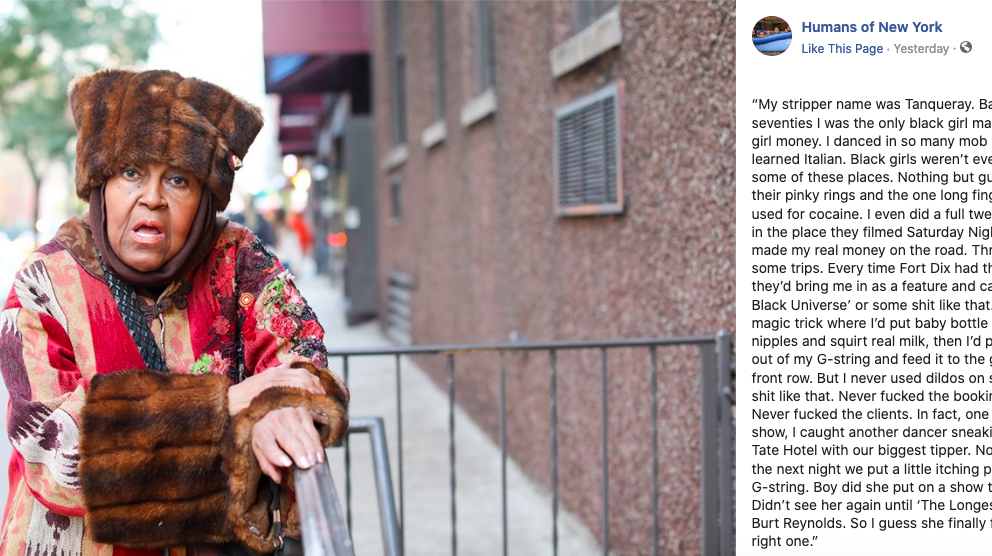 “My stripper name was Tanqueray. Back in the seventies I was the only black girl making white girl money.”

Tanqueray on Humans of New York is the best thing to happen on the internet in this the entire year of our lord 2019.

“My stripper name was Tanqueray. Back in the seventies I was the only black girl making white girl money..." pic.twitter.com/Xk9RZXuiKV

This amazing woman (we don't know her non-stripper-name) was profiled on the popular person-on-the-street profile project Humans Of New York this week, and shared her story of seventies adult dancer stardom under the stage name Tanqueray.

People flipped out over her look, her voice, and her story.

“My stripper name was Tanqueray. Back in the seventies I was the only black girl making white girl money. I danced in so many mob clubs that I learned Italian. Black girls weren’t even allowed in some of these places. Nothing but guidos with their pinky rings and the one long fingernail they used for cocaine. I even did a full twenty minutes in the place they filmed Saturday Night Fever. But I made my real money on the road. Three grand on some trips. Every time Fort Dix had their pay day, they’d bring me in as a feature and call me ‘Ms. Black Universe’ or some shit like that. I had this magic trick where I’d put baby bottle tops on my nipples and squirt real milk, then I’d pull a cherry out of my G-string and feed it to the guy in the front row. But I never used dildos on stage or any shit like that. Never fucked the booking agents. Never fucked the clients. In fact, one night after a show, I caught another dancer sneaking off to the Tate Hotel with our biggest tipper. Not allowed. So the next night we put a little itching powder in her G-string. Boy did she put on a show that night. Didn’t see her again until ‘The Longest Yard’ with Burt Reynolds. So I guess she finally fucked the right one.”

“The scene was different back then. All the adult clubs were mob controlled. It all flowed up to some guy named Matty The Horse. Honestly the mob guys never bothered me. They were cool, and I liked how they dressed. They wore custom made suits. And they went to hair stylists, not barbers. These guys wouldn’t even let you touch their hair when you were fucking them. Not that I ever fucked them. Because I never turned tricks. Well, except for one time. I took a job from this woman named Madame Blanche. She controlled all the high dollar prostitutes back then. She was like the Internet-- could get you anything you wanted. And all the powerful men came to her because she never talked.

If she doesn't have a TV show or a book deal by the end of the day, I don't even know what this world exists for anymore.

At least the gin company could give her a sponsorship!

We need a movie about Tanqueray from the Humans of NY page and we need it NOW!!!! pic.twitter.com/KNECYwgYM0

We need a Tanqueray from Humans of New York docuseries ASAP

Dear God/universe, please let them hire me to write Lady Tanqueray's book. My love of good tea and wordsmithing has led me to such a time as this. I would do it justice.

tanqueray got everyone poring over the histories of every woman that appeared in “the longest yard.” https://t.co/YsGTlBBV8Q

I care about nothing but this goddamn LEGEND.

also, her potential memoir has the best opening line: “My stripper name was Tanqueray.” pic.twitter.com/q5jos4eLz2

Doja Cat has declared herself a cow, a hamburger-eating one at that, in her recently-released, now-viral music video titled “Mooo!.” Noisey on the 22-year-old Los Angeles-based pop singer: The track starts inauspiciously, a chintzy nursery rhyme about cows set to pixel art visuals, but bouncing anime boobs in the background quickly let you know you’re […]

Last week, freaky photos appeared online of a strange person dressed in a filthy clown costume and carrying black balloons wandering the night streets of Green Bay, Wisconsin. Turns out, “Gags the Clown,” as the character was known, turned out to be a hoax by indie filmmaker Adam Krause. He hoped the online freak-out would […]