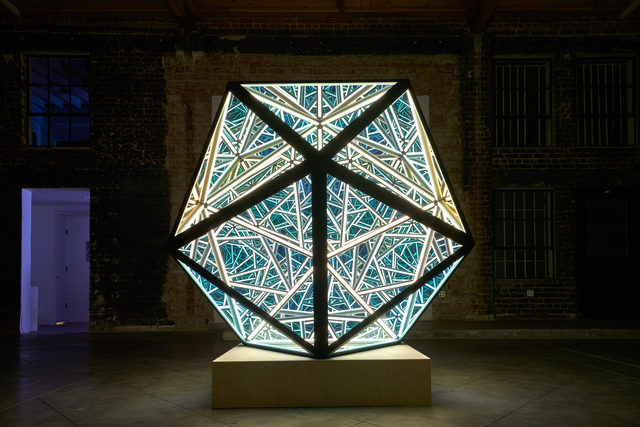 Portal Icosahedron is a sculpture by Anthony James, "famous for setting fire to a Ferrari in a birch forest." Created with steel, glass and LED lights, the mirrors within generate an incredible repeating view of its own structure without including the observer or the exterior. It reminded me at one of William Chyr's new game, Manifold Garden.

Anthony James’ work takes up the concepts of the universal and transcendental in order to demonstrate the impossibility of their representation. The historical cosmology of Plato is a primary inspiration, both for the sculptures of icosahedrons and for the silhouette of Baroque architect Francesco Borromini’s dome for Sant’Ivo in Rome. Colorful rings of neon nod to the ancient concept of the universe as a set of concentric planetary orbits. The effect is both esoteric and industrial, orphic and distinctly concrete. Modern art historical references abound as well – Bruce Nauman, Ellsworth Kelly, Minimalism – but the artist’s attention is on the wonderment and possibility presented by distant ideals.