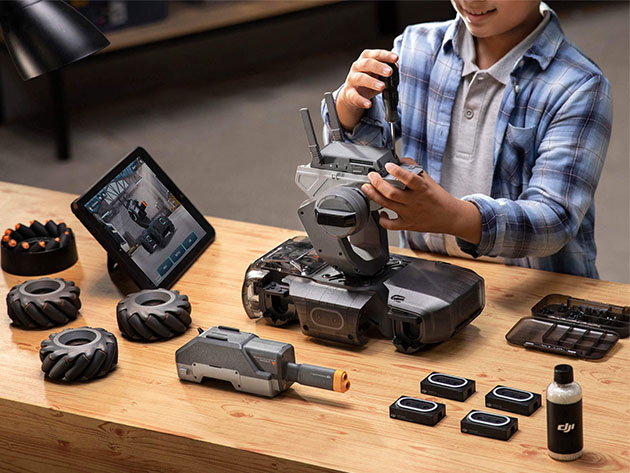 Just over a decade ago, kids might learn robotics – if they got introduced to it at all – by painstakingly programming a robot arm to pick up a cup.

These, however, are great times to be alive. Get a load of the DJI RoboMaster S1 STEM Education Robot, a kit that's sure to kick off a whole new generation of makers.

It's inspired by DJI's annual RobotMasters competition, so you know this is no simple RC toy. And while it is fairly simple to build in the basic configuration, the 46 customizable components give kids plenty of room to tweak and learn.

The OS supports Scratch and Python languages, which can be used to program any number of custom moves into this tiny tank. It can be controlled on a smartphone by way of the RobotMaster app, and the omnidirectional wheels are capable of some fancy floorwork.

Put it into the arena with another S1, and you open up a whole new world of robot combat via the infrared beams, bead launcher, and hit detectors. You can even communicate remotely with the onboard FPV cameras and intercom feature.

Right now, you can take an early Black Friday discount of 15% off the DJI RoboMaster S1 by using the online code BFSAVE15, bringing the price down to $466.65.