This accessory turns a laptop into a dual-monitor workhorse 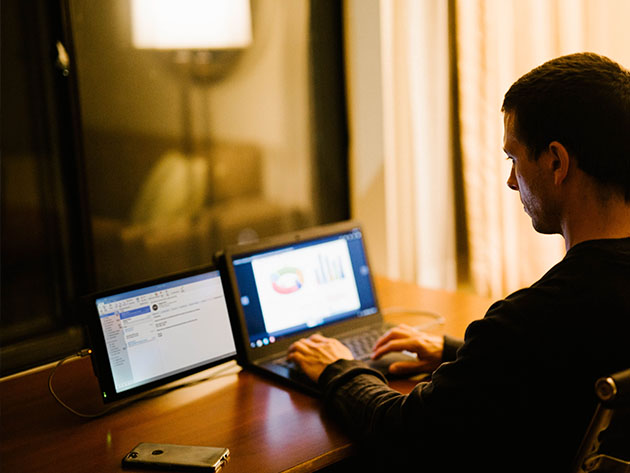 If you've ever worked with two monitors, you know how much time they save. When you're dealing with big jobs that involve lots of data, there's nothing like being able to see all your charts and spreadsheets at a single glance. Once you're used to it, there's no reason you'd ever go back other than the obvious one: There's just not enough space for two laptops in the average coffeeshop or coworking space.

The Mobile Pixels DUEX Pro Portable Dual Monitor is a solution to that dilemma, and it's one so simple we're surprised it isn't more widespread.

The DUEX Pro is a 12.5 inch, 1080p monitor that attaches easily to the back of any laptop. Its dual-sided sliding mount makes it easy to pop out and use whenever you need it, and the versatility doesn't stop there. Once it's pulled out, it can swivel up to 270 degrees to accommodate any workspace.

It can even be folded around 180 degrees to display on the back of the laptop—perfect for on-the-fly presentations or team projects.

Right now, the Mobile Pixels DUEX Pro Portable Dual Monitor is 15% off the retail price, but you can take an additional 15% off by using the online code BFSAVE15, lowering the price to $179.35.