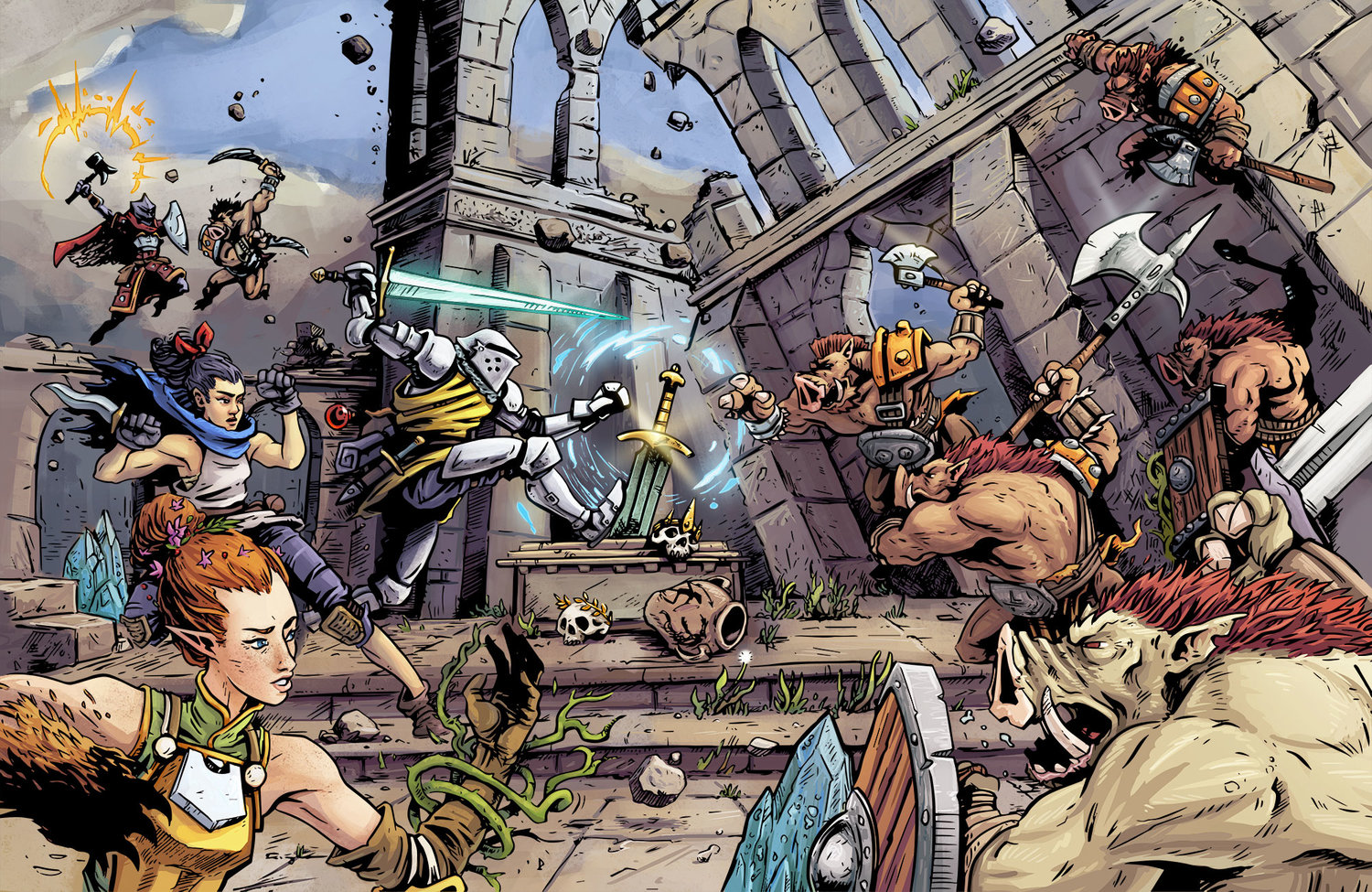 Recently, I've found myself playing more games from small, independent game companies and those sold directly from the designers. Here are a few of these offerings currently on my radar, at my painting station, and on my tabletop. If you're looking for game-related gifts for the holidays, consider supporting these talented and hardworking indie creators.

Sean Sutter, the mastermind behind Relicblade, was kind enough to send me some of his Relicblade merch earlier this year. Throughout the year, I watched my tabletop gaming friends enthusiastically flinging themselves down the Relicbalde rabbit hole, but I only recently got around to my own swan-dive into these realms. I love games that are largely the vision of a single designer/artist. Kingdom Death Monster always comes to mind. Like that uncompromising vision of a game as a creative platform for an artist's self-expression (Adam Poots in its case), Relicblade is a gaming universe populated by the imagination of artist and designer Sean Sutter. Sean designs the game, does all of the artwork and book design, digitally sculpts the figures--all of it. He also produces videos that chronicle his design and manufacturing process. Looking at his product line, you'd be hard pressed to distinguish Sean's output from any major game publisher. Our modern world of on-demand publishing, small scale manufacturing, digital design and sculpting, 3D printing, and crowdfunding has created the near-ideal conditions for creators like Sean to be able to compete with much larger commercial concerns. Similar things could be said of all of the designers and games featured in this article.

Relicblade is not unlike Frostgrave. It is a narrative fantasy skirmish wargame where you field a warband of five miniatures (in Frostgrave, it's ten). The game is played on a 2' x 2' table of scenery and games play very quickly and brutally. There are two main factions, the Advocates and the Adversaries, and numerous subfactions for each. On the path of the Advocate you will find knights, rangers, elves, gnomes, clerics, and thieves. The Adversaries include pig men, Golem-esque bone constructs, lizard men, and Eldritch creatures from the black lagoon (Apostles of the Deep). Like Frostgrave, the goal of the game is to collect treasure tokens (here known as relic tokens) while fending off the other player(s). There is magic in Relicblade, but more of the emphasis is on weapons combat. I honestly prefer sorcery over sword, so Frostgrave will always have a special place in my Bag of Holding, but the beauty, richness, and perfectionism of Relicblade, along with game design aspects I really like (such as being character card- and upgrade card-based), make Relicblade a new favorite.

Sean is now taking pre-orders on the 2nd edition of The Seeker's Handbook (the basic rulebook). He has also just created an official Relicblade Tabletop Simulator mod on Steam. Armed with only the rulebook, you can now play this fun fantasy skirmisher with far-flung friends over the Internet.

Another low-model-count indie skirmish game I've been take with is Wild in the Streets from Slow Death Games. Here, you field a gang of youthful ne'er-do-wells from such factions as punks, straight edge, metalheads, death rockers, roller derby girls, and goths. Like Relicblade, WITS is card-driven. Here, in a rather unique movement mechanic, the cards for each faction are shuffled into one deck and players take turns turning over the cards. Whichever ganger is drawn, that's who's activated that turn.

The rules are super simple and fit onto a single 8-1/2" x 11" piece of paper. To play, you need the free rules, a faction of 4-6 gangers, and a deck of event cards. Tooth Chipper ($5) is a WITS zine that includes five fun game scenarios, such as "Record Store Day" (where factions fight to collect all of the special promo disks) and "Not-So-Secret Sipper" (where one gang helps an inebriated straight-edger to the porta-potty while his straight edge mates try and catch him to "re-educate" him).

Rangers of Shadow Deep is an indie project of Joseph McCullough, creator of the highly-acclaimed fantasy skirmish games Frostgrave and Frostgrave: Ghost Archipelago. Rangers of Shadow Deep is a solo or coop game. It takes place in a world where a dark shadow is creeping across the lands bringing madness, destruction, and unspeakable horrors in its wake. While conventional armies fight against the terrors that spew forth from the shadows, rangers are tasked with venturing into the darkness to try and figure out what's causing this devouring menace, to rescue prisoners, and to disrupt the enemy in any way they can. Players create a ranger, gather his/her warband, and play through a series of missions. If your ranger survives, they gather powers and abilities to be sent on more dangerous missions. Like Frostgrave it is miniature agnostic so you can play with any fantasy miniatures you have on hand. You only need the rules to get started.

I covered Sean Äaberg's Dungeon Degenerates in a previous Boing Boing gaming roundup. Since then, Sean has added a bunch of additional expansion sets, guidebooks, and other cool game content and related Degenerate swag. Sean also suffered a serious stroke earlier this year and has been recovering from that. As you can imagine, he has lots of medical bills and his recovery has been a long road back, so buying into this awesome fantasy adventure game, done in Sean's unique psychedelic horror style, will help support him as an indie game artist.

I haven't actually played this sci-fi horror RPG yet, but I bought the rulebook and couldn't be more impressed with it. Besides being an award-winning game, the rulebook is a master class in presenting RPG rules and settings in a very graphical, readable, and gameable way. And it just looks gorgeous. There are two adventure modules that are equally well put together and juicy-looking, Dead Planet ($8) and A Pound of Flesh ($8). Here is a video review of Mothership on the must-see OSR YouTube channel, Questing Beast:

Heimat Der Katastrophe is a "punx collective" and DIY music label in Milano, Italy that produces "dungeon-drone" and "dungeon-synth" music. They have a bunch of low-fi electronic music for dungeon-delving available on Bandcamp. Their physical cassettes come with OSR (old school renaissance) RPG scenarios inside. Sadly, most of them are sold out, but there is plenty of digital content available on Bandcamp (both the music and PDFs of the scenarios). I cannot love this enough! [H/t to Peter Bebergal]

Some other indie games to check out: Star Breach, a free sci-fi skirmish game, Wasteman ($17), a mutant post-apocalyptic skirmisher, and Giga-Robo, a card-driven miniature boardgame of robotic combat.