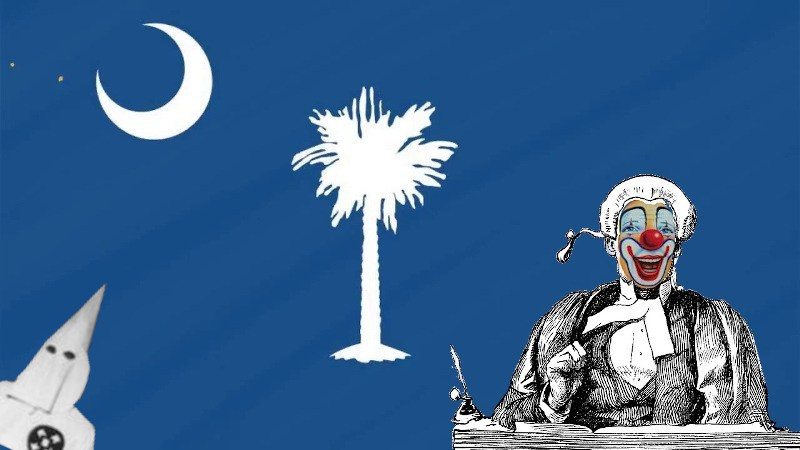 South Carolina's system of appointed magistrates allows the state senate to appoint "judges" with no legal training, some of whom cannot pass a basic competency test on the first try, to hear over 800,000 cases a year; the magistrates are appointed and re-appointed without a background check (there's also a loophole that let some judges escape even that reappointment hearing, serving for 20 years without undergoing the process), allowing them to serve even after grave judicial misconduct.

The Post and Courier's Joseph Cranney has rounded up the dismal record of some of the state's magistrates, with particular emphasis on former state rep and retired cop Mike Pitts, whose public statements in the state house and on social media include saying that Cory Booker "alway [sic] looks like he just hit crack real hard"; complaining about seeing "people from the middle east in Walmart...after being subject to this incident I now support shutting down all immigration until we stop the demise of our culture"; "[transgender people] aren’t sure what the hell they are."

In office, Pitts tried to block the removal of the Confederate flag from the statehouse after the 2015 mass murder at Emanuel AME Church in Charleston; he proposed legislation to force journalists to register with the state; and he co-sponsored a 2018 bill "requiring South Carolina lawmakers to consider seceding from the Union if the federal government 'confiscates legally purchased firearms.'"

When Pitts retired from political life, he complained that he was having trouble finding a job, and made an unsuccessful bid for a patronage appointment as head of the South Carolina land conservation agency -- but found the background check too onerous (he called it an "aggressive inquisition" and blamed it for his failure to recover from a heart attack, saying that thanks to the background checks, "I tired quickly and realized that my cognitive skills have been affected.").

However, Pitts found no such difficulty being appointed to the bench months later, on the mere say-so of a single state senator, Danny Verdin.

Pitts is manifestly unqualified to serve as a judge, and given his public record, cases he hears involving people of color, immigrants, trans people, or other groups he has made discriminatory remarks about would be liable for appeal on the grounds of his obvious bias.

But Pitts isn't the only unqualified, racist, bigoted magistrate in South Carolina: Charleston Magistrate James Gosnell (reappointed in May 2019!) used a racist slur against a Black defendant during a bond hearing; Beaufort County Magistrate Peter Lamb no longer serves (he had to resign after calling crack "a Black man's disease" and committing other discriminatory acts that led to him entering into an agreement with the state Supreme Court whereby he can never seek judicial office again without the court's permission).

Republican state Rep. Gary Clary, a former state circuit judge, said the posts could be “grounds for recusal” in cases where people of color or transgender people appear before Pitts.

“That’s the reason judges don’t normally have Facebook and Twitter accounts,” Clary said. “You are supposed to be fair and impartial.”

“None of us were aware of these posts, or his ethnic and racially insensitive comments, which I think disqualify him as a fair or impartial judge,” Harpootlian, a longtime trial lawyer, said after The Post and Courier described Pitts’ posts.

“If I was Muslim or of Middle Eastern descent, I would be fearful of appearing in front of him.”

A spokesman for Gov. Henry McMaster said no one brought the posts to his attention before McMaster, a Republican, signed off on Pitts’ appointment this year. The governor declined to expand on the issue. ​