Sale on the Voyager Golden Record LP and CD sets and The Family Acid: California photobook! 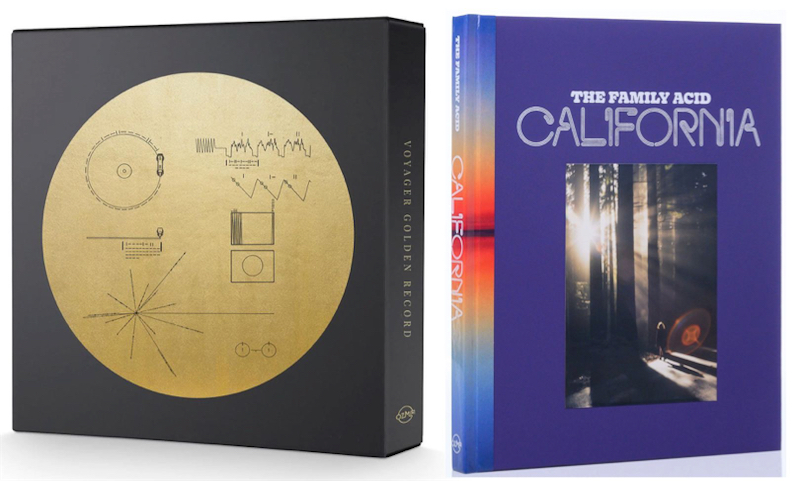 In 1977, NASA launched two spacecraft, Voyager 1 and 2, on a grand tour of the solar system and into the mysteries of interstellar space. Attached to each of these probes is a golden phonograph record containing a message for any extraterrestrial intelligence that might encounter it, perhaps billions of years from now. Experience the Voyager Record the way it was meant to be played.

• Full-color 96-page hardcover book (12” x 12”) containing all images included on the original Voyager Interstellar Record, gallery of images transmitted back from the Voyager probes, and new essay by Timothy Ferris, producer of the original golden record
• Two audio CDs containing all of the Voyager Golden Record music and sounds

For more than 50 years, photographer Roger Steffens has explored the electric arteries of the counterculture, embracing mind-expanding experiences, deep social connection, and unadulterated fun at every turn. Think of this book as a family album belonging to a very unconventional family exploring the visionary state they call home. This specially-priced package also includes the below photo print on LSD blotter paper (undipped), signed by Roger Steffens. (Both items also available separately.)

Designer Yuri Suzuki of Pentagram and killer Japanese killer electronic kit maker Gakken collaborated on this fantastic-looking Easy Record Maker. The US$81 (!) device enables you to cut and play your own (very) lo-fi 5″ albums! Susuki will demo the device on his Instagram tomorrow. From DesignWeek: The machine comes with ten blank five-inch discs […]