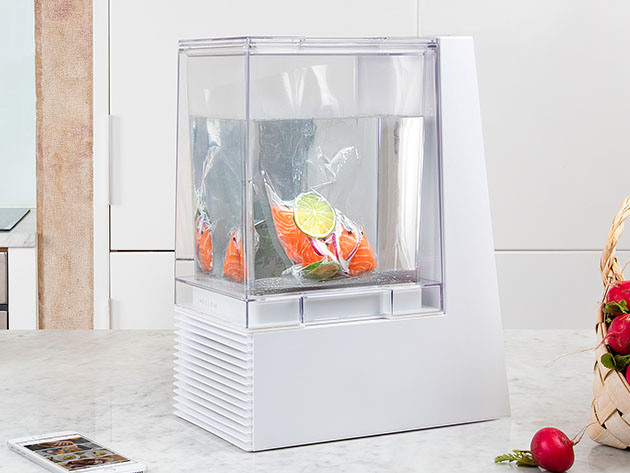 After a long day at work, cooking a meal from scratch can seem like too much trouble. Unfortunately, the alternative is usually something unhealthy.

Enter the Mellow Sous Vide Precision Cooker. This compact water bath uses cutting-edge technology to cook meat and veggies at the perfect temperature for exactly the right amount of time. It takes 30 seconds to set up, and you can control the cooker through your phone.

The sous vide style of cooking involves sealing food inside a plastic pouch which is then placed in a water bath. The technique is used widely in professional kitchens, allowing chefs to produce tender meat and veggies with minimal input. Mellow lets you use the same trick in your home kitchen.

The device connects wirelessly to your smartphone. You simply tell the app what you are cooking, and what time you want it to be ready.

Mellow does the rest, weighing the ingredients automatically to work out the right settings. The cooker even has a built-in refrigeration system, which keeps food safe until you are ready to eat.

Mellow will work well for anyone with a busy schedule who wants to eat better. This innovative cooker retails for $349, but you can currently get it for $169.99 when you use the 15% discount code MerrySave15.