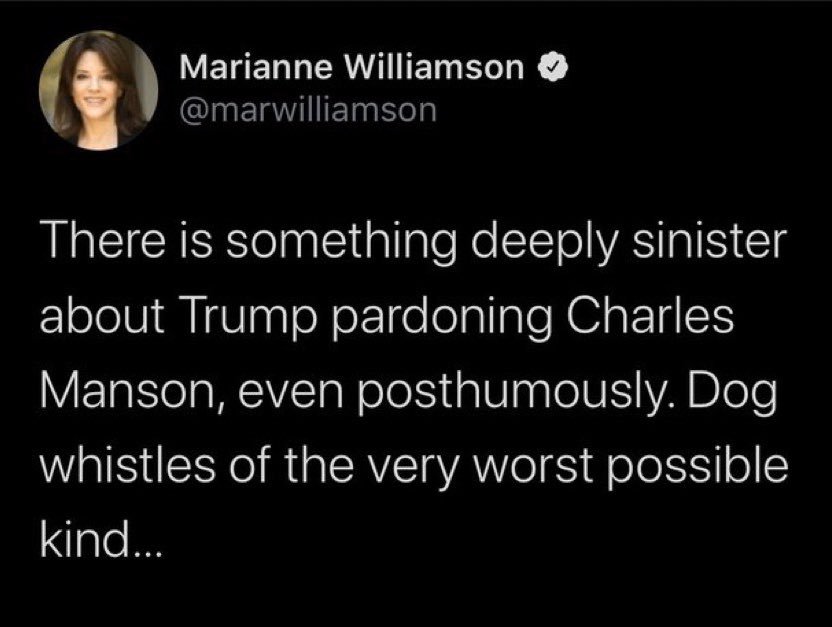 "There is something deeply sinister about Trump pardoning Charles Manson, even posthumously. Dog whistles of the very worst kind..." Williamson wrote.

But it was Williamson who was whistled, and she later added: "I erroneously tweeted that President Trump had posthumously pardoned Charles Manson. Glad to have been wrong."

Manson died in 2017. Denied parole three times, he was never considered for any kind of clemency. Furthermore, Manson was charged under California state law and tried in Los Angeles County Court, making a presidential pardon impossible as he was not convicted of a federal crime.

Presidential pardons for the dead are rare. Only four have received such a pardon, the latest being Trump's recent pardon of heavyweight boxer Jack Johnson, a likely ingredient of whatever fake news Williamson credulously commented upon.

Williamson's positive, spiritually-themed messaging stood out at early Dem debates, but also drew attention to questionable advice in her books, and she has so far failed to make headway in opinion polls.