County seizes man's home because he owed $8.41 in property tax 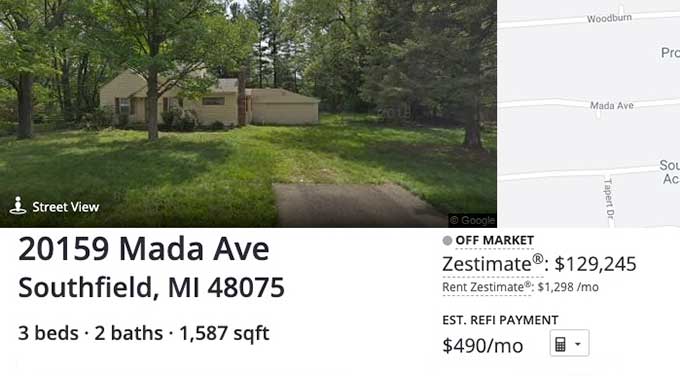 Uri Rafaeli (83) a retired engineer, underpaid his property tax bill by making a mistake calculating the interest. He paid $8.41 less than he owed. As a result Michigan's Oakland County seized the property, sold it for $24,500, and kept the overage from the auction ($24,215), reports Forbes. Rafaeli has tried to get the house, or at least the overage back, but he keeps losing in court. The house is currently valued at $129,245 on Zillow.

He didn’t argue that he didn’t owe tax, penalties, interest and fees. But he did object to the County taking the excess. The County argued that Rafaeli had no rights to the equity because the General Property Tax Act does not expressly protect it. And that’s the reason that Rafaeli keeps losing: The courts have sympathy for his plight but have found that the law does not prevent the County from keeping it.

He’s not alone. Tens of thousands of properties in Detroit have been subject to the same kind of treatment. Many of those who owe taxes understand that they have a debt, but they don’t necessarily understand how to navigate the process or what the failure to pay on time can mean. As with Rafaeli, even something as simple as miscalculating the interest due, can have serious consequences.

Dana Rohrabacher was an oddity: a Republican lawmaker sent from Democratic stronghold to the California legislature he's now out of a job).