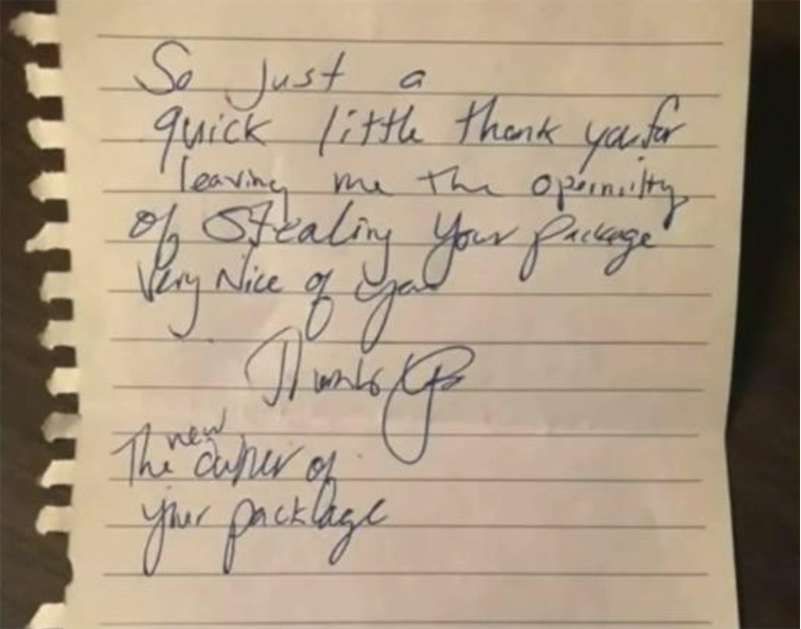 A porch pirate in St. Paul, Minnesota had the gall to leave a smug "thank you" note after stealing a package off Hilary Smith's doorstep.

“I do appreciate a nicely-crafted ‘thank you’ note, but this is ridiculous," Smith told WCCO. I was angry and confused and quite flabbergasted someone would actually leave a ‘thank you’ note when they steal a package."

The package was a Christmas gift for her boss. In the hopes that the thief returns, Smith says she's placed a fake package on her stoop for the creep to swipe. Inside the box is "a gift from her dog."

I shalln’t call it instant justice but it does serve to remind us that criminality is best performed calmly, like you’re supposed to be there, the way the rich do it. Justice was served the proper way: 58 days in jail. Alicia Treat had pleaded guilty to the thefts in January with alleged accomplice Brian […]

The person stealing this package struck me as very unlucky: the homeowner has his driveway, his porch, his living room and his truck all cammed up. Then he was also lucky enough to take a lucky turn or two through his neighborhood hunting her down, and to have police give enough of a shit to […]