Hack your cooking in 2020 with an air fryer. These 6 are on sale today 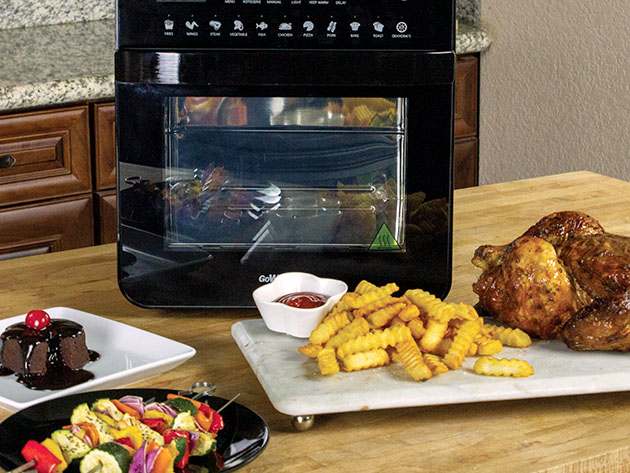 You may have heard of air fryers, but they're a lot more versatile than the name implies. Healthier (and quicker!) french fries are just the tip of the iceberg with these innovative cookers, and here are six of our favorites. As if they needed any additional highlighting, you can save an extra 20% off the final price on any of them by using the coupon code 20SAVE20.

This premiere unit in the GoWISE line lets you take full advantage of the Rapid Air Circulation tech that cooks food fast with minimal amounts of oil. With a 12.7 quart capacity, you can roast and fry everything up to a full chicken while the 15 presets make it easy to make a variety of meals on the fly.

Here's another high-capacity model from GoWISE USA that's designed to save space. There are three removable racks that allow you to make multiple dishes at the same time, and a recipe book that shows you how to refine them.

This smaller air fryer lets you cook a wide array of meals (even desserts) in a PFOA-free stainless steel pan. There's even a crisper tray that allows for more efficient toasting, frying or warming up.

Bake up a quick batch of cookies or slow roast a rotisserie chicken over a series of hours with this mid-sized model. The 8 presets include a dehydration mode for making great snacks out of fruits or veggies.

The Chefman is perfect for tight spaces, packing a ton of functionality into a 6-liter space. It sports 6 presets for easy operation and the speedy cooking times are made even quicker with no preheating necessary.

On a budget? This refurbished power air fryer is deeply discounted but still makes a variety of great meals with 8 presets to help you along the way. The 6-quart capacity lets it handle big entrees or multiple side dishes at once.