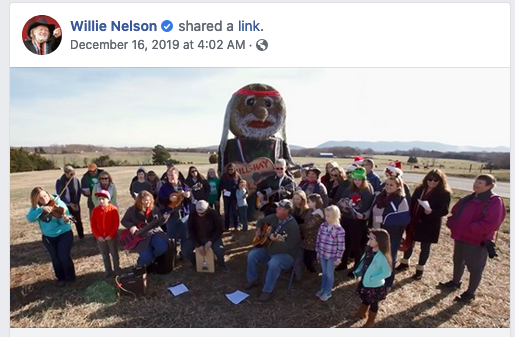 In Huddleston, Virginia, a woman who makes hay art sculptures every year decided to make one of Willie Nelson, and the internet went nuts about it. Turns out the country music legend kind of liked it, and shared it on his social media page (Link, and see screengrab above).

“Will-Hay Nelson” is (well, was) a 15-foot-tall hay sculpture of the singer that was created as part of an annual holiday tradition in Huddleston.

Not the best video, just a screen recording off my phone but still pretty darn cool!!

For the past eight years, Huddleston native Beth Bays has debuted a new hay bale creation in late November or early December at her farm on Tolers Ferry Road. Past creations include characters from “The Wizard of Oz;” a drummer bear; a cow; an elephant; the Virginia Tech Hokie bird; and characters from “Rudolph the Red-Nosed Reindeer.”

However, this year’s creation — “Will-Hay Nelson” — has struck a chord in the community, Bays said.“This one seems to be everyone’s favorite by far,” Bays said. “My cousin joked that I might have to quit now because I’ll never be able to top this.”