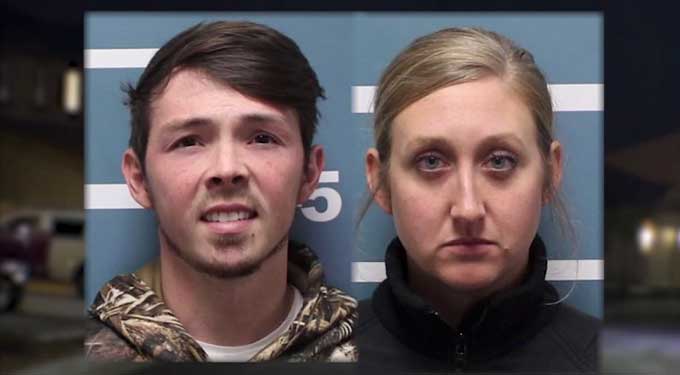 Corey Curnutt (25) and Savannah Grillot (29) of Visalia, California were arrested on four counts of assault with a deadly weapon and conspiracy charges, reports Fresno's ABC 7 News. The married couple were accused of planting "bait bikes" in front of their house, and when someone tried to take the bikes, the couple would run outside wielding aluminum baseball bats and beat the would-be thieves. Curnutt and Grillot recorded the incidents and posted them YouTube.

But she and her husband had a front-row seat to the never-ending entrapment happening next door, and finally felt it had gone too far.

"There would be blood in the street or on the sidewalks the next day," she says.

So they said something to the couple.

"We had mentioned, 'Maybe it's not the best idea, you're kind of bringing them into the neighborhood that might not be here otherwise'. And it was a lot, it was every night, and just a lot of activity," LeBeau says.

Dave Maass from the Electronic Frontier Foundation writes, "Facebook’s practice of taking down these individual accounts when they learn about them from the press (or from EFF) is insufficient to deter what we believe is a much larger iceberg beneath the surface. We often only discover the existence of law enforcement fake profiles months, if […]

Here’s how the federal Bureau of Alcohol, Tobacco, Firearms and Explosives (ATF) uses your tax dollars – to pay a creep to pretend he loves a woman, play with her children, and persuade her to break the law for him so that the agents can swoop in and arrest her. That’s what happened to Jennifer […]