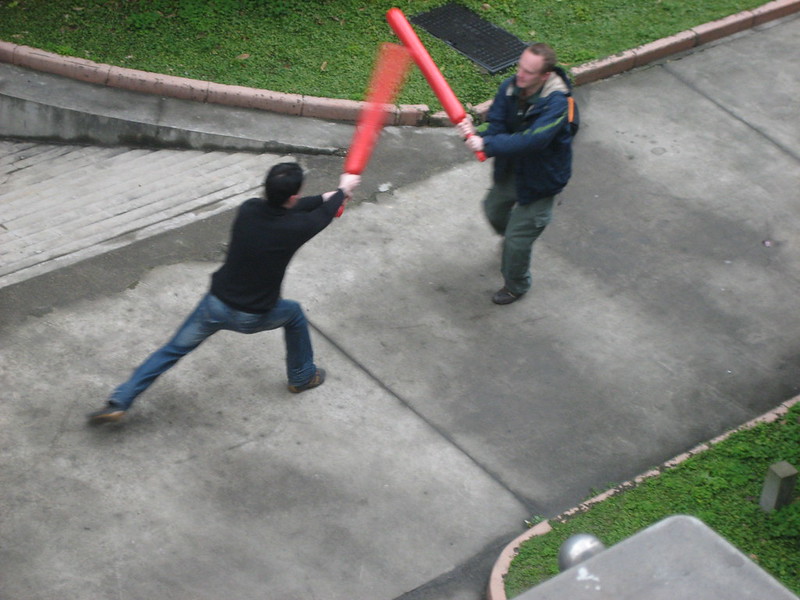 Some American conspiracy theorists believe (incorrectly) that the US inherited the entire body of English common-law prior to the American Revolution, including the law allowing litigants to demand trial by combat (this law was struck down in England in 1819).

This question was comprehensively resolved in the USA in 1892, when the Iowa Supreme Court's Pierson v. Lane decision held that "The principles of the common law have been adopted in this country only so far as applicable to the habits and condition of our society, and in harmony with the genius, spirit, and objects of our institutions."

But there's a whole cottage industry of American amateur constitutionalists -- like the delusional sovereign citizen movement -- that believe that they have discovered secret deep meanings in America's founding documents that can be used as magical incantations to allow them to occupy federal lands, or ignore courts, or stop paying taxes...or challenge people to trial by combat.

Most recently, David Ostrom, of Paola, Kansas asked a court in Iowa to use trial-by-combat to resolve a dispute with his ex-wife (he said he would allow her to choose a champion to fight her side, and asked for 12 weeks to source appropriate swords).

The ex-wife’s attorney opposed the motion, saying that although he and his client “do have souls to be rended, they respectfully request that the court not order this done.” This gave Ostrom both a way out and an opportunity to claim victory, by saying that the other side had, legally speaking, chickened out:

Historically, [Ostrom] said in court records [most likely a reply brief], trial by combat was not always won by way of death, but also when a party “cries craven,” yielding to the other.

“Respondent and counsel have proven themselves to be cravens by refusing to answer the call to battle, thus they should lose this motion by default,” Ostrom wrote, adding that if the other party decided otherwise, he wants to proceed with a “blunted practice style” of sword play.