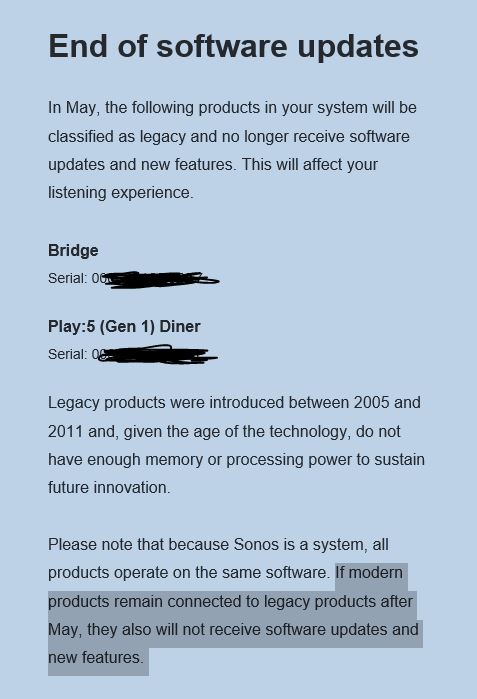 In Q4/19, Sonos informed investors that it would be discontinuing support for older systems in order to reduce its software costs and thus maximize profits.

Sonos equipment comes with a kill-switch that renders it permanently inoperable; Sonos has long had a deceptive practice of encouraging customers to invoke this switch before "recycling" their older equipment, which actually ensures that it will become e-waste, rather than being refurbished and sold on the used market, which would potentially displace sales of new Sonos equipment.

The company has urged customers owning the soon-to-be-obsoleted gear to brick it, offering a discount on new equipment for those who do so.

Speakers are among the most durable components of sound equipment; when I was a kid, I inherited my uncle's speakers, which were 20-30 years old at the time, and which I was able to use with modern amps for more than a decade after that. Sonos's speakers have substantially more toxic components than older speakers, including conflict minerals, as well as materials that are powerfully carcinogenic and have the potential to poison the air and water when they enter the waste-stream.

Third parties could conceivably create their own firmware for Sonos speakers that would allow them to continue to function, but doing so could risk substantial criminal and civil liability under Section 1201 of the DMCA (which bans bypassing DRM, a major feature of Sonos speakers), the Computer Fraud and Abuse Act (which has been interpreted as a ban on violating terms of service), software patents and trade secrets.

"We expect that in the near term, this backward compatibility will no longer be practical or cost-effective, and we may decrease or discontinue service for our older products," the manufacturer's Q4 2019 10-K financial filing explains. "If we no longer provide extensive backward capability for our products, we may damage our relationship with our existing customers, as well as our reputation, brand loyalty and ability to attract new customers."

Remember that Sonos speaker you bought a few years back that works perfectly? It's about to be screwed for... reasons [Thomas Claburn/The Register]

I can either let you Brick my £400 speaker and send it to landfill in exchange for 30% off a new one or keep it and I'll stop receiving updates to my entire house full of your products.

Are you having a fucking laugh? pic.twitter.com/o5gNADZkXH