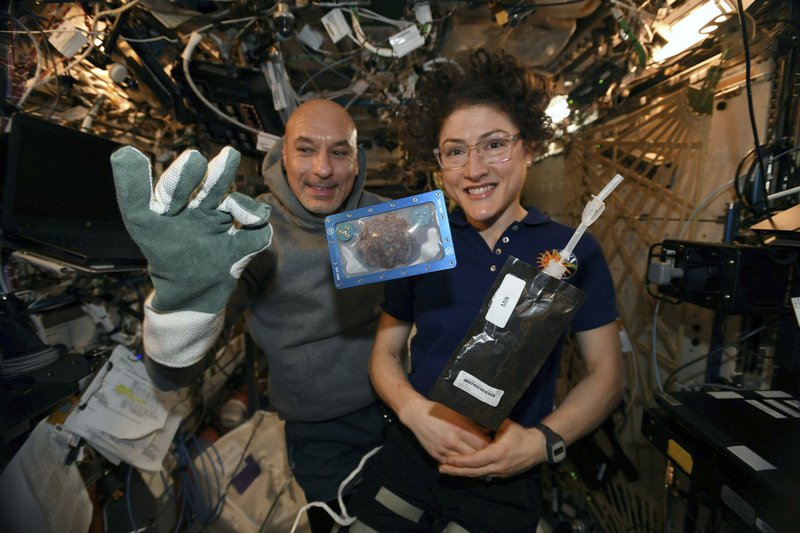 “How do they taste? No one knows.”

Italian astronaut Luca Parmitano was the master baker in December, radioing down a description as he baked them one by one in the prototype Zero G Oven. The first cookie — in the oven for 25 minutes at 300 degrees Fahrenheit (149 degrees Celsius) — ended up seriously under-baked. He more than doubled the baking time for the next two, and the results were still so-so. The fourth cookie stayed in the oven for two hours, and finally success.

“So this time, I do see some browning,” Parmitano radioed. “I can’t tell you whether it’s cooked all the way or not, but it certainly doesn’t look like cookie dough any more.”

Parmitano cranked the oven up to its maximum 325 degrees F (163 degrees C) for the fifth cookie and baked it for 130 minutes. He reported more success. Additional testing is required to determine whether the three returned cookies are safe to eat.

PHOTO: U.S. astronaut Christina Koch tweeted this image on Dec. 26, 2019. Koch and Italian astronaut Luca Parmitano pose for a photo with a cookie baked on the International Space Station. Today, results are in for the first chocolate chip cookie bake-off in space. The tastiest cookies required two hours of baking time last month on the International Space Station. It takes far less time on Earth, under 20 minutes. (NASA via AP, File)