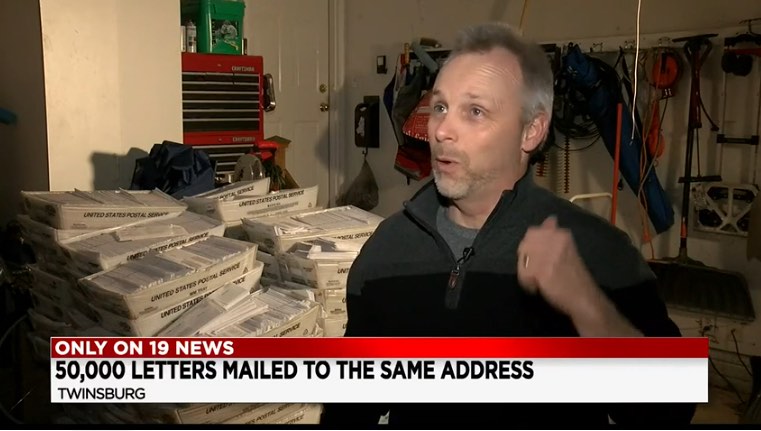 Dan Cain said he was suspicious when a postal worker in Twinsburg, Ohio said he couldn't retrieve his mail the normal way, and soon he saw two USPS workers wheeling out two huge bins of mail, all addressed to his Twinsburg address.

“I was shocked, are you kidding me, who makes that kind of mistake,” Cain told local TV news

The College Avenue Student Loan Company made a mistake, and says they used the wrong interest rate to calculate the payment. So, all 55,000 of them were incorrect.

Cain counted 79 plastic bins of mail each containing roughly 700 letters, all exactly the same, a statement for the student loan, he and his wife Dee, had taken for his daughters college tuition.

Thinking he was out of options, it took 2 trips in his truck to get all the letters to his home where they are now sitting in his garage.

The student loan company apologized for the mistake, blaming a glitch in a new outgoing mail system, and his postal carrier later told him he may have been able to tell the clerk at the post office to return the mail.

“I just may start a fire, a bonfire, and burn it all,” Cain said with a chuckle.

“We are working with Dan directly on a remedy, including picking up the mail from him if possible and a statement credit for the inconvenience,” the company’s chief operating officer, Tim Staley, said in an email sent to reporters today.