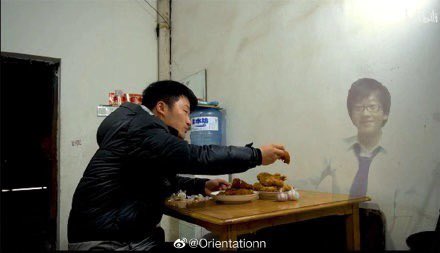 Online in China, where Novel coronavirus 2019-nCoV has now killed at least 630 as of today, one death seems to have affected the entire country profoundly.

Li Wenliang was a medical doctor and a whistleblower who was reprimanded by authorities for warning of a fast-escalating and deadly outbreak of a strange new virus.

He died yesterday, of the virus he warned others about.

Hundreds have died, and yet this is the fatality that is shaking China. https://t.co/5gMrjoTCTg

The tributes and memorials are -- wow. Wow. Wow.

This one, below? the person in the snow?

Their body forms an exclamation point.

Here are a few more, from China-based photojournalists, reporters, and others.

Can’t confirm, but this is supposed to be the salute given to Li Wenliang tonight in Wuhan. If it’s real, it’s incredible. The physical version of what’s been happening on the Chinese Internet for the past 24 hours. https://t.co/I68qdqUtgs

Latest censored on Weibo:"Tonight, let me blow the whistle for Wuhan."

This is an online call for people in Wuhan, Hubei and the rest of the world to mourn Li Wenliang's death & pay tribute

In Hong Kong too, people are paying their respects and mourning the death of Dr Li Wenliang, who tried to alert China to the coronavirus but was reprimanded for it. He died yesterday of this new type of pneumonia https://t.co/ciFW2ABMk4

I was full of hope. I thought we didn’t let this man freeze in the snowstorm, I found him and helped introduced him to the world. I told Dr. Li good men will be rewarded 好人会有好报. He was shy when I asked him to send me a selfie. He said he hadn’t washed his hair for a while. https://t.co/Es5OargqjA

"The hashtag #wewantfreedomofspeech# was created on Weibo at 2 a.m. on Friday...and had over two million views and over 5,500 posts by 7 a.m. It was deleted by censors, along with related topics, such as ones saying the Wuhan govt owed Dr. Li an apology." https://t.co/sDaVBqMr46

The sounds of an entire city reacting to the death of #LiWenliang, the coronavirus whistleblower. https://t.co/LbGin7hFct

Citizens in Wuhan sent flowers to the hospital where whistleblower doctor #LiWenliang passed away to express condolences. #CoronavirusOutbreak pic.twitter.com/Kkj0XxXJA7

#LiWenliang gets the top obituary for the Times tonight, and rightly so pic.twitter.com/v4lHp30hqP

今天上海《#新民晚報》的頭版
Today’s front page of a well-known newspaper in #Shanghai: “Let transparency pierce through the fog around the virus” pic.twitter.com/BLyR3Kze09

A small memorial for Dr. Li Wenliang at the branch of Wuhan Central Hospital in Houhu where he died. pic.twitter.com/DBUUEbIfIX

100% of my WeChat feed, from dissident lawyers to Huawei employees, is raging over Li’s death. Haven’t seen China unified like this since the Wenzhou train crash. pic.twitter.com/lJQE1XMJBQ

Realists say nothing will change. Probably not. But a crack has opened. pic.twitter.com/OJRQOw95qu

Looking at this and thinking of @EmilyZFeng’s interviewer saying the new hospitals are places where they send you to die. No facilities visible, no drips visible, no medical workers visible. https://t.co/t7BgSDV5P2

Let’s not forget this tweet as we mourn the passing of Dr. Li Wenliang https://t.co/ncJP9bzg0v

& a poem, from after the death of Liu Xiaobo

"You want to bury him / bury into the dirt / but you forget / he is a seed" pic.twitter.com/pnGkHxgndI

It was not just the #WuhanCoronavirus that killed #DrLiWenliang; it was also the Communist system of secrecy & cover-up. https://t.co/hcrYDPohOy

The Chinese public have staged what amounts to an online revolt last night after the death of Dr. Li Wenliang.Government officials,biz figures & ordinary folks,have posted numerous messages expressing their grief and anger. It's sth I haven't seen in years https://t.co/zge4rVysB2 pic.twitter.com/uL4JVd89u1

#HongKong in a time of coronavirus. Pix from the interwebs. pic.twitter.com/GKv38QPsyx

PREVIOUSLY ON BOING BOING
• China: Doctor who sounded alarm on Wuhan virus dies of it