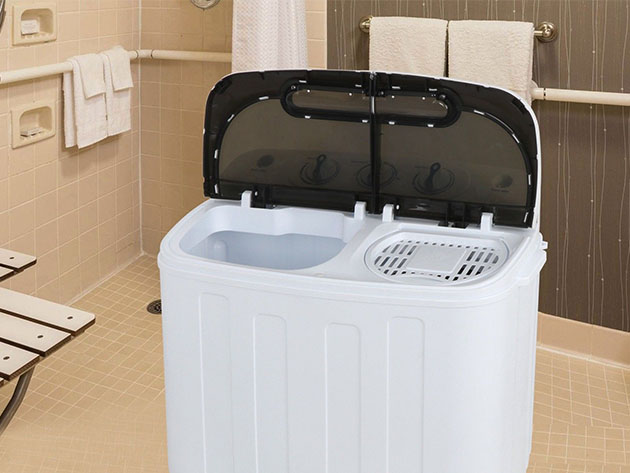 If youâ€™re one of the millions who regularly trudge down to a laundromat to clean all your clothes and other washables, then youâ€™ve undoubtedly wished for your own washing machine. Unfortunately, folks in apartments, mobile homes, dorms, tiny houses and other confined or restricted living situations donâ€™t always have the luxury. And to say the laundry visit is often a chore doesnâ€™t do it adequate justice.

However, you might be surprised at the ability and usefulness of some mini washing machines like the ZENY Twin Tub Washing Machine, a unit that can go where its full-sized brothers never could. And before you dismiss the idea, consider that the notoriously trollish Amazon reviewers pretty firmly support the ZENY, offering 4 out of 5 stars from more than 330 reviews.

At just two feet across and 26 inches high, the unit can fit almost anywhere, washing up to eight pounds of laundry per load in its tiny footprint. Of course, the real game-changer here is the Twin Tub dual design, which allows you to wash and spin dry separate loads at the same time.

But it isnâ€™t enough to do a job -- it has to be done well. The ZENY is powered by a silent 1300RPM motor with rotary controls for a better cleaning effect and a water-efficient design that leaves your laundry clean, fresh and ready to be worn.

And at 23.5 pounds, this washer is so portable you can even throw it in your vehicle to use during camping trips. Regularly $199.99, the ZENY Twin Tub Washing Machine is now more than half off, just $94.99.